SINGAPORE, Dec. 23, 2022 /PRNewswire/ -- Klaytn Foundation, the non-profit overseeing the growth of the Klaytn ecosystem, has announced the transition to a permissionless validator structure. In time, anyone will be able to participate in the Klaytn ecosystem as a block validator alongside existing Governance Council (GC) node operators, as long as they meet minimum qualifications that are currently being finalized. With network incentives now provided at the protocol level, the transition to a permissionless validator structure will allow more to participate in the block validation process, paving the way for greater decentralization of the Klaytn ecosystem. 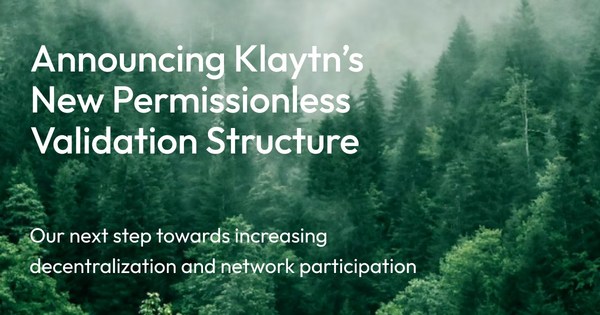 Klaytn's consensus algorithm will be improved in order to allow as many validators as possible to participate without compromising network performance. Plans are also in progress to establish qualifications, compensation, and penalties for block validators in order to ensure network stability. Beyond maximizing network effects, increased validator participation will also result in enhanced security and censorship resistance. By increasing KLAY transactions and diversifying the network of depositors, Klaytn's permissionless validator structure will make it more difficult for malicious attacks, such as hacking or censorship attempts, to occur.

A crucial component of the Klaytn ecosystem, validators function as Core Cell Operators (CCO) that operate both consensus and proxy nodes: verifying the accuracy of data contained in new blocks and ensuring that blocks are processed efficiently across the network. As Klaytn transitions to a permissionless system, it will grant a wider range of privileges to end-users such as block validation rewards and node rights, which can be leveraged to create new business opportunities. Node authority on the Klaytn network can be used to create decentralized finance (DeFi) services, including public staking services, or by integrating tokenomics into new business structures and operations.

"Permissionless systems, like those used by well-known blockchain projects such as Bitcoin and Ethereum, are essential for Klaytn as we strive for decentralization, transparency, and openness," said Sangmin Seo, Representative Director at Klaytn Foundation. "With the shift to a permissionless validator structure and through future strategic business activities, we hope to create a more competitive Klaytn ecosystem in the global market and ultimately share our successes with all participants."

Klaytn's compensation system for block validators will be based on two factors: the performance of block validation and the amount of KLAY that is staked. Those who demonstrate strong validation performance and have a larger amount of KLAY staked will receive higher compensation. This is intended to incentivize positive behavior and influence on the platform, as well as improve the profit distribution structure.

Put forth to the Klaytn Governance Council on 4 November 2022, the proposal to amend Klaytn's validator structure was approved by way of voting, which concluded on 19 December 2022. 18 GC members participated in the vote, with 6 abstentions, 3 votes against and 9 votes in favour, including those from Kakao, Ground X, and Netmarble.

Klaytn is a public blockchain focused on the metaverse, gamefi, and the creator economy. Officially launched in June 2019, it is the dominant blockchain platform in South Korea and is now undergoing global business expansion from its international base in Singapore, led by the Klaytn Foundation.

Since unveiling its metaverse roadmap in early 2022, the Ethereum-equivalent L1 chain has seen many well-known companies come onboard its metaverse-including game developer and publishing powerhouses: Netmarble and Neowiz. It recently ramped up efforts to lay the foundation for the metaverse and to expand use cases.

TOKYO, Japan: Honda has announced that it will manufacture a new hydrogen fuel cell system, which was jointly developed with ...