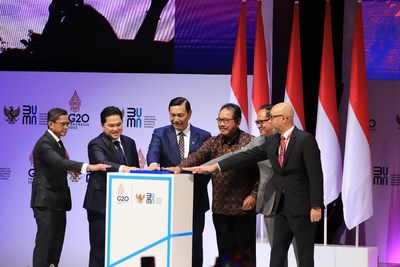 Minister of State-Owned Enterprises (SOEs) Erick Thohir revealed the role of SOEs are crucial as they have the potential of creating millions of job opportunities in Indonesia. Therefore, SOEs are continuously pushed to create value for the community and play their role as agents of developments.

"The role of SOEs as agents of developments in society will go hand in hand with the transformation of SOEs. We believe we can further help SOEs to enhance their role as driving agents of Indonesia's development," said Erick.

President Director of BRI Sunarso also believes that Indonesia's economic growth can be achieved by focusing on MSMEs, who are the country's growth drivers. "97% of jobs in Indonesia comes from MSMEs. Therefore BRI, whose core business is MSMEs, has a crucial role in promoting financial inclusion in Indonesia."

The successes of the UMi Holding are reflected in the data. The number of customers who have been integrated by the three UMi Holding entities reached 23.5 million customers with a total outstanding financing of IDR 183.9 trillion in August 2022. This achievement is in line with one of the priority agendas of the G20 Presidency, namely financial inclusion.

BRI is optimistic that the ongoing growth will have a positive impact on the economy in Indonesia. "Our efforts to suppress inflation are important, but our goal is also to continue to grow our economy so that stagflation does not occur, thus reducing the risk of additional unemployment," said Sunarso.