LOUISVILLE, Ky., Aug. 23, 2022 /PRNewswire/ -- In September 2022, Michter's Distillery will release its US*1 Toasted Barrel Sour Mash Whiskey for sale to U.S. and export markets. This whiskey was released once before in 2019. 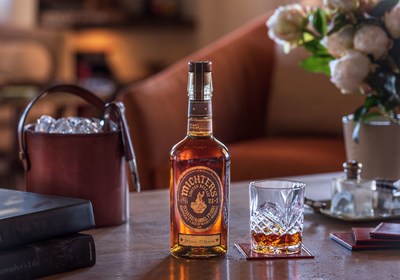 "At Michter's we're proud of the great work done by our production team to create our Toasted program," commented Michter's President Joseph J. Magliocco. "We are always trying new things as we endeavor to make highest quality whiskeys, and with the 2014 release of our US*1 Toasted Barrel Bourbon we became the first company to offer a toasted barrel American whiskey. It's great to see how this new category has taken off over the past 8 years."

To make this special Toasted release, Michter's starts with fully matured barrels of its US*1 Sour Mash Whiskey. "The heart of this toasted product is a wonderful whiskey that begins on the palate like a sweet and delicious bourbon and then has a rye-like spice on the finish," said Michter's Master Distiller Dan McKee. Michter's US*1 Sour Mash is then transferred into specially toasted barrels for additional aging. The precise toast profile of the second barrel is artfully selected by Michter's Master of Maturation Andrea Wilson. About her toast selection, Wilson observed, "The 2022 Toasted Sour Mash release takes the Sour Mash expression and enhances it by adding notes of smoked honey and gingersnap cookies accentuated by toasted oak, all while honoring the sweet and spicy balance of our US*1 Sour Mash. Working on the Toasted series really brings forward the influence of the barrel and represents the dedication of the Michter's team to continuously provide exceptional whiskey."

When Michter's US*1 Sour Mash, the base of this Toasted release, was selected by The Whisky Exchange as "Whisky of the Year" for 2019, it marked the first time that any whiskey from the United States had ever achieved this honor. Michter's US*1 Toasted Barrel Sour Mash Whiskey is 86 proof and will sell in the U.S. for a suggested retail price of $100 per 750ml bottle.

Beyond its main distillery in the Shively section of Louisville, Michter's operations extend to two other sites in Kentucky. In Springfield, Michter's is farming estate grown grain on its 205-acre property, while in downtown Louisville, Michter's has its second distillery in the historic Fort Nelson Building. Situated in a prime location on West Main Street opposite Louisville Slugger and on the same block as the Frazier Museum, Michter's Fort Nelson Distillery features the legendary pot still system from Michter's Pennsylvania. It also has educational tours with whiskey tastings and The Bar at Fort Nelson, which features classic cocktails curated by spirits and cocktail historian David Wondrich.

ALBUQUERQUE, New Mexico: New Mexico district attorney Mary Carmack-Altwies has said that actor Alec Baldwin and up to four others ...

US again returning money to victims of Bernie Madoff, 88% recovered

WASHINGTON D.C.: The U.S. Department of Justice has announced that after nearly 14 years, the victims of Bernard Madoff's Ponzi ...

After sanctions, Russia says will build own aircraft, not rely on west

MOSCOW, Russia: Russia's state-owned engineering firm Rostec has said that the country's aviation industry will continue operating without the West, ...

US claims American-JetBlue alliance is anti-competitive

BOSTON, Massachusetts: The U.S. Justice Department has asked a Boston judge to force American Airlines and JetBlue Airways to scrap ...

Abortion regardless of marital status legalized by India's top court

NEW DELHI, India: In a decision widely hailed by women's rights activists, India's top court upheld the right of a ...

GENEVA, Switzerland: In an effort to ease power shortages this winter, the Swiss government said it will temporarily loosen water ...

Lyft taxi service puts hold on hiring due to US recession

SAN FRANCISCO, California: Ride-hailing firm Lyft said it is freezing all U.S. hiring through the end of the year, in ...

DETROIT, Michigan: Ford Motor Co. has announced that it will invest $700 million in its Kentucky plant, which will assemble ...

BERLIN, Germany: As Germany grapples with surging gas and electricity costs caused largely by a collapse in Russian gas supplies ...

After Covid, US struggles to process Indian visa applications

WASHINGTON D.C.: U.S. Secretary of State Antony Blinken said the U.S. is working to reduce the backlog in visa applications ...