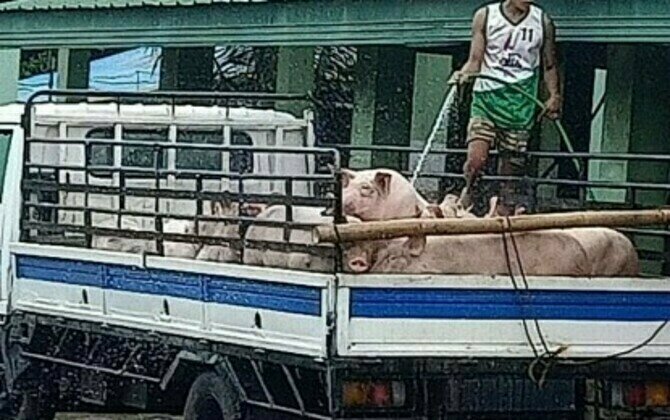 SAN JOSE DE BUENAVISTA, Antique -Members of the Sibalom Livestock and Poultry Raisers Association (SILPRA) have opened a meat shop at the public market of Sibalom town so they could dispose of their hogs as meat due to the decrease in demand.

SILPRA president Elma Pena said in an interview Monday that in the past three weeks, they were not able to ship out hogs to Luzon area due to lack of orders from Luzon including in Batangas province.

She said that SILPRA, which has 490 members most of whom are hog and poultry raisers from Sibalom, used to ship out four to five times a month.

In a separate interview, Dr. Marco Ardamil, Antique Provincial Veterinary Office chief of the Public Health Division, said there is low demand for hogs as areas in Luzon like Batangas City are already repopulating their pig farms after they were affected by the African swine fever (ASF).

"The Department of Agriculture (DA) has an ongoing project INSPIRE (Integrated National Swine Production Initiatives for Recovery and Expansion) that assists hog-raisers in the (ASF) affected areas be able to restart their hog industry," he said.

The repopulation made the supply readily available so traders momentarily stopped getting hogs from this part of the country.

"We expect though that with the start of the 'ber' months there will again be higher demand for live weight (pigs) to augment those being produced in Luzon," he said.

He added that since there is no Double AA slaughterhouse yet in Antique, the hog-raisers in the province could not transport slaughtered hogs to other places, and just transporting live pigs.

From the previous PHP150 to PHP160 per kilo of live pigs being sold to traders, the live weight is now being sold at PHP120 to PHP130 per kilo that is just being considered break-even considering the high cost of feeds. (PNA)