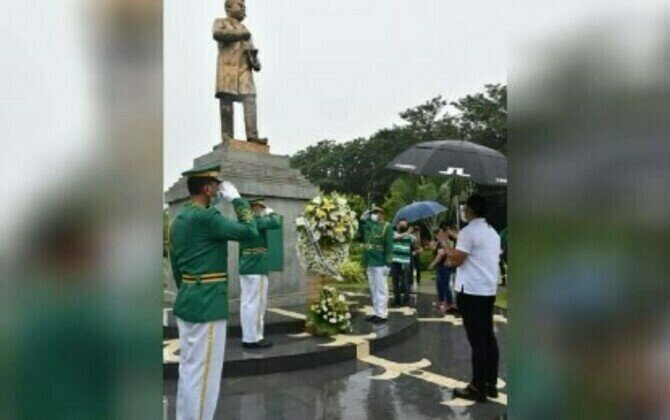 CITY OF MALOLOS, Bulacan - Governor Daniel Fernando called on residents to look back on the province's rich cultural history as they celebrated the 444th Bulacan Foundation Day on Monday.

During the simple celebration held at the Bulacan Capitol Gymnasium here, Fernando asked his constituents to keep in mind the sacrifices of their ancestors and to value the province's rich heritage which symbolizes the resilience of the Bulakenyos in today's era.

He said the province took a vital role in the past, while at present aims to become one of the engines of the country's economic growth.

The program started with a wreath-laying activity on the monument of the Bulakenyo hero Gat Marcelo H. Del Pilar in front of the provincial capitol building. This was followed by a holy mass inside the gymnasium.

Villanueva, in his speech, mentioned the measures which he authored during the 17th and 18th Congresses for the benefit of Bulakenyos such as the Tulong-Trabaho Law, Department of Migrant Workers Law, and First-Time Jobseekers Assistance Law.

"Ang kinabukasan at paroroonan ng ating minamahal na lalawigan ay nasa ating mga kamay (The future and where our beloved province will go is in our hands)," the senator said.

By virtue of Proclamation No. 19 signed by Executive Secretary Victor D. Rodriguez and Section 14 of the Panlalawigang Kautusan Bilang C-004 or the "An Ordinance Enacting the New Provincial Administrative Code of Bulacan", Aug. 15, 2022, is declared as a special non-working day in the whole province. (PNA)