Groups hopeful Marcos SONA will include plans vs. insurgency 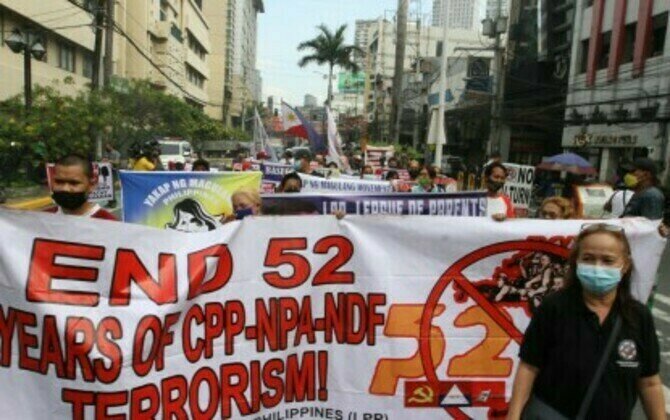 Remy Rosadio, League of Parents of the Philippines president, said they expect that the deceptive recruitment of the youth by the Communist Party of the Philippines-New People's Army-National Democratic Front (CPP-NPA-NDF) through its front organizations will be included in Marcos' priorities.

"As our new head of state, father and protector of all children and youth of our country, we are expecting that he will give priority to the security of our children while they are in school and university campuses, vulnerable to CPP-NPA's recruitment," Rosadio said in a text message on Sunday.

She noted that most parents, especially those whose children were recruited to join the armed struggle, wish that their efforts will be pay off through support from the government.

"We risk our lives going out on the street and at other concerned government offices and private offices staging rallies so that our voices, the parents' voices, can be heard," she added.

Rosadio said they "need assurance" that the government will continue to lay down supportive plans and actions against the insurgency and appealed to Marcos to continue programs of the Duterte administration being implemented by the National Task Force to End Local Communist Armed Conflict (NTF-ELCAC).

"Their way of handling our insurgency problems was very effective. We had unmasked those organizations created by (CPP founder) Joma Sison, the fronts recruiting our innocent children to join the armed revolution and brainwashing the children to overthrow the government," Rosadio said.

"We will support and help you and NTF-ELCAC in any way we can so that the recruitment of minors will totally end. We want a communist-free country. We want our children to finish their studies without hindrance. We want to sleep at night thinking that our children are safe from communist rebels and sympathizers," she said.

Nolan Tiongco, Makabagong Alyansa and Liga Independencia Pilipinas spokesperson, said the President must lay down his concrete plans on how to end the communist terrorist groups' attacks and exploitation of vulnerable sectors.

"Ang pangarap ng mayorya ng Pilipino ay tapusin na ang CPP-NPA-NDF at sana 'yun din ang pangarap nya (We hope that he will share the dream of the majority to put an end to the CPP-NPA-NDF)," he said in another text message.

The Anti-Terrorism Council also formally designated the NDF as a terrorist organization on June 23, 2021, citing it as "an integral and inseparable part" of the CPP-NPA that was created in April 1973. (PNA)