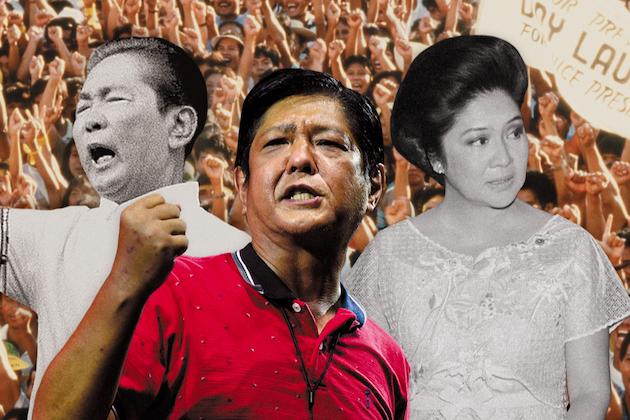 POLITICAL PROPAGANDA takes all forms. The Marcoses have always used the circus elements of politics to manipulate and control the public mind. Mainstream media need to understand that their coverage even of entertainment can promote lies, betraying the purpose of press freedom and its constitutional protection.

The movie, "Maid in Malacanang", scheduled to screen early next month, is the latest example of this strategy. Described as a "drama-comedy", it tells the "untold story" of the Marcos family's last days in the Palace from the point of view of a "reliable source," according to its director, Darryl Yap.

Media picked up the announcement of the film and the public reactions to it in a number of news reports. One newspaper did the issue justice, drawing from a range of sources whose experience in film and theater combined with those who witnessed the violence of Martial Law by providing context to the producer's quite limited point of view.

Pushing back against lies

CMFR cheers the Philippine Daily Inquirer's July 22 report. Allan Policarpio, Ruel S. De Vera, and Krixia Subingsubing interviewed former Martial law detainees, human rights advocates, film industry veterans, and one historian who all agreed that the movie is "another attempt to contradict historical facts about their [the Marcoses] rule." It presented the film in the current context of political dis-information.

Bart Guingona, an award-winning actor-director and activist, had this to say about the film: "The need to saturate all media ... with lies is a tactic. It's called fire-hosing. If you hear a lie often enough you begin to believe it's true, or at least you begin to doubt your old certainties." Guingona stressed the need to "recruit arts and artists in the defense of truth," a defense that must play out in the arena of social media where historical revisionism dominates. The report closed with calls from Guingona and historian Ambeth Ocampo to reclaim social media "on behalf of truth and accuracy."

Unfortunately, two news organizations published accounts of the movie as though oblivious of its political motive-which is to present the Marcoses primarily as suffering victims of injustice and to deny the abuse of power which led to their ouster.

CMFR jeers the Manila Bulletin and news.ABS-CBN.com for articles in the service of PR for the movie, its point of view, its purpose.

The Bulletin report "'Traumatic and painful,' says Imee Marcos on final 72 hours in Malacanang" in the newspaper's July 20 entertainment section was over a thousand words long, highlighting Sen. Marcos' personal feelings over their political misfortune. In the same light tone typical of entertainment reporting in Philippine media, she recalled her role in producing the movie as something to do after the campaign: ". . .wala na akong career. Ano ang gagawin natin. So sabi ko tara, gawa tayo ng sine." (...I no longer have a career. What will we do. So, I said, let's go make a movie.)

In a press conference for the movie also discussed in the article, Marcos made very clear the purpose of the movie: "Ang mahalaga ay yung legacy ng tatay ko at yung apelyido at pamilya namin ay maahon at makabangon." (What is important is that my father's legacy and my family and our name be uplifted.)

Likewise on July 18, ABS-CBN online posted its article in the entertainment section. The report carried Marcos' statements defending the film as a way of presenting their side of the story. Unlike the Bulletin piece, the network's report raised some questions about the movie and its intention of spreading an incomplete and therefore false interpretation of the events it showed. But these questions were also quickly dismissed by Imee Marcos, chief consultant of the film, who was the only person quoted in the report.

Reports like the two cited above boost the importance of the movie and legitimize its use as political propaganda. Such coverage is a disservice to the media community and its efforts to share reports based on facts and accurate context. Such reporting makes mainstream media part of the propaganda machine not just of the administration but of the Marcos family and its dismal history.