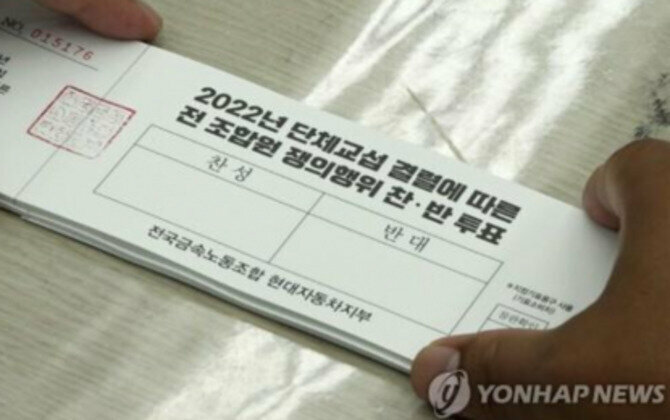 SEOUL - Unionized workers at Hyundai Motor Co. have voted in favor of a strike, setting the stage for another walkout that may cut the carmaker's vehicle output amid declining sales.

The labor union said 71.8 percent of the 40,958 members, who cast their ballots on Friday, turned out to be in support of a walkout.

The union can go on strike when the National Labor Relations Commission concludes there are irreconcilable differences between the carmaker and the union and decides to stop a mandatory mediation, which usually lasts 10 days.

The union's move came as Hyundai Motor's sales dropped 7.6 percent to 1,877,193 units in the first six months of this year from 2,031,185 units during the same period of last year amid a global chip shortage.

If the labor union goes on strike, it would be the first time after four years.

Labor strikes have plagued the country's biggest carmaker for decades. Still, the carmaker and the union reached wage deals without strikes for the past three years amid a trade dispute with Japan in 2019 and the Covid-19 pandemic from 2020 to 2021.

Last year, the management and the labor reached an agreement on a 75,000 won increase in basic monthly pay, a bonus of 200 percent of a worker's monthly salary plus 3.5 million won, 2.3 million won in performance-based benefits and five Hyundai shares per person.

The company, however, rejected the union's demand to extend the retirement age to 64 and reinstate fired workers.

In 2020, the company and its union agreed on a wage freeze for the first time in 11 years due to the pandemic after the 1998 Asian financial crisis and the 2009 global financial crisis. (Yonhap)