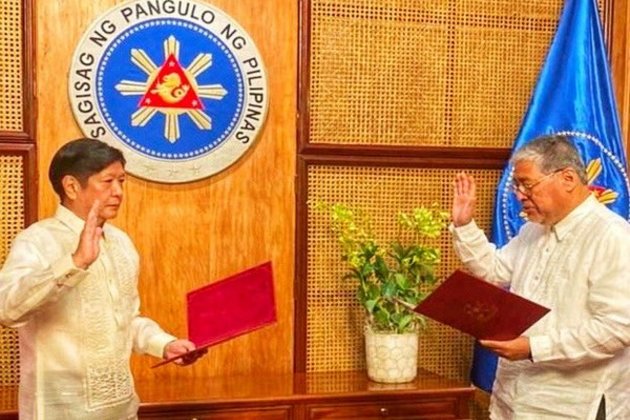 Manila [Philippines], July 3 (ANI): External Affairs Minister S Jaishankar on Saturday congratulated the Philippines Ambassador Enrique A. Manalo on being appointed as the Secretary of the Department of Foreign Affairs.

Taking to Twitter, Jaishankar said that he is looking forward to working closely with the new Secretary to further strengthen the India-Philippines partnership.

"Congratulate Ambassador Enrique A. Manalo on his appointment as Secretary of Foreign Affairs of the Philippines. Look forward to working closely with him to further strengthen the India-Philippines partnership," EAM tweeted.

Manalo, the Philippines' former Permanent Representative to the United Nations (UN), flew in from New York to take his oath before Marcos in Malacanang Friday, The Manila Times reported.

Manalo earlier served in the foreign service for nearly four years and joined the Department of Foreign Affairs in 1979.

He is the son of the late Ambassador Armando Manalo and Rosario Manalo, the former ambassador to Belgium and political adviser of the Philippine mission to the United Nations, The Manila Times reported.

Before his appointment as Foreign Affairs secretary, Manalo was the DFA's undersecretary for policy, his second stint in the same position, which he first held from 2007 to 2010.

He has represented the country and has served as the chairman of various international meetings and conferences, the latest of which was the Senior Officials Meeting during the Asean Foreign Ministers Meeting Retreat (AMM Retreat) in Boracay, Malay, Aklan, last February 20.

Manalo worked in the foreign service in various sectors before his first appointment as ambassador extraordinary and plenipotentiary in 2003.

He was also the assistant secretary for European Affairs after his stint as the minister counsellor of the Philippine Mission to the UN in New York from 1998 to 2000. (ANI)