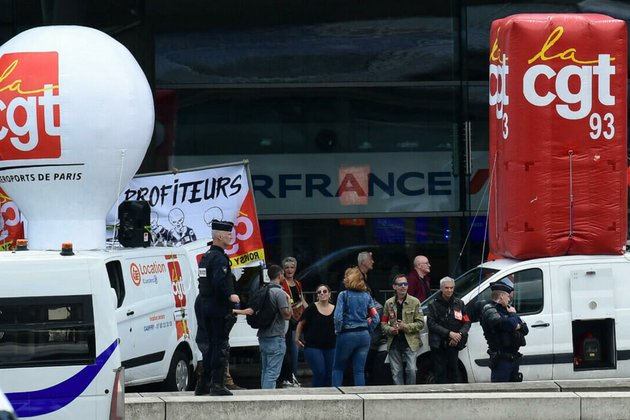 Airport workers striking for a third consecutive day on Saturday said they would stage another walkout at the French capital's main international hub from July 8 to 10 to press their pay demands, signalling further disruption for early summer travellers.

The current walkout, which began on Thursday, is due to continue until Sunday, though France's civil aviation authority said less disruption was expected.

The civil aviation authority DGAC said it asked airlines to cancel one in five flights at the Paris hub between 7am and 2pm local time (GMT+2) on Saturday, a day after one in every six flights was cancelled.

Airport operator ADP had offered staff a 4 percent pay rise if they agreed to end the strike on Friday, but workers rejected the offer, a union representative told Reuters.

"A majority of workers think the offer is not good enough," said Daniel Bertone, who represents the CGT union. "They don't trust management and they don't accept the 'it's this or nothing' blackmail."

"We notified the management of a new strike plan from the 8th until the 10th of July," Bertone added.

ADP directly only employs a minority of Charles de Gaulle ground personnel, the majority of whom hold labour contracts with airlines and a large number of subcontractors.

Staff of Paris airports' subcontractors plan other strikes from July 13 to 17.

Unions are demanding a net €300 increase per month on salaries, an amount the companies involved had rejected.

Scores of ground staff protested in front of one terminal on Friday to demand a big pay rise to cushion the pain of high inflation, emboldened by booming demand for air travel and staff shortages caused in part by the Covid-19 pandemic.

Queues built up inside the terminals as some passengers sought to make alternative arrangements and others arrived early fearing disruption.

"We've been here since 3 o'clock this morning and we're still waiting. This is not going well at all," Philippine Tournier, who had booked a flight for Cancun, Mexico, told Reuters.

Rising living costs are hurting households across Europe. Inflation in Britain hit 9.1 percent last month, its highest in four decades, contributing to strikes or threats of industrial action by workers across transport services, schools, postal services and hospitals. In the European Union, the harmonised rate of inflation is 6.5 percent and the non-harmonised 5.8 percent.

Several European airlines and airports have experienced strikes in recent weeks and more travel disruptions are expected next month. Airports in cities such as London, Amsterdam, Rome and Frankfurt have had to cope with flight cancellations and long queues.