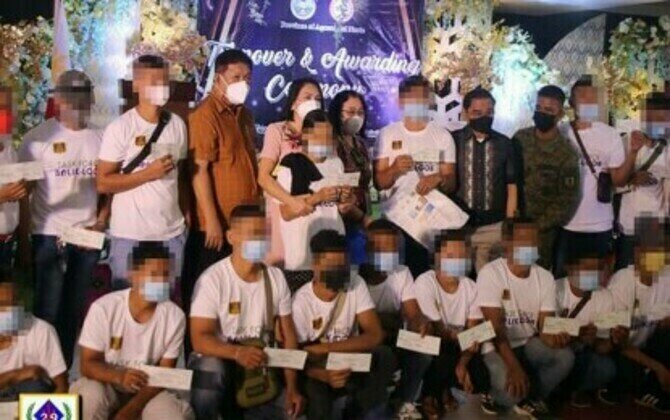 BUTUAN CITY - A total of 114 former New People's Army (NPA) rebels who surrendered on different occasions this year in Agusan del Norte were provided with livelihood assistance and remuneration for surrendered firearms.

The assistance, amounting to PHP10.7 million, was part of the government's Enhanced Comprehensive Local Integration Program (ECLIP) for the former rebels (FRs).

The amount was released by the Department of the Interior and Local Government (DILG) and the provincial government of Agusan del Norte on Friday.

In a statement on Saturday, the Army's 29th Infantry Battalion (29IB) lauded the release of the livelihood assistance to the FRs that will provide support for their families.

Among the FRs who benefited from the release of the livelihood assistance was Danilo Franco who thanked the government for the opportunity given to him to start his life anew.

"I am thankful to all the agencies of the government who helped me. The ECLIP has given me a chance and hopes to live peacefully with the people I love," Franco said.

With his new life, he added that he would work hard for the future of his family, especially their children.

"Now that I am back in the mainstream, my family, especially my wife, will no longer worry about my security," Franco said.

Col. Jason Saldua, commander of the 29IB, said the activity on Friday fulfilled the government's promise to the FRs who once lost their lives and have found their way back to their families and communities.

"The ECLIP is a blessing to our brothers and sisters who are now willing to change for the better," Saldua said.

He also urged the remaining NPA rebels in Agusan del Norte to surrender and avail of the programs and services of the government.

"The troops of 29IB will be here to assist and help you as you surrender. Lay down your arms now and experience a new life with your family. Truly, there is hope for every rebel who desires to change and live a normal life," Saldua said.

The National Democratic Front has been formally designated as a terrorist organization by the Anti-Terrorism Council on June 23, 2021, citing it as "an integral and inseparable part" of the CPP-NPA created in April 1973. (PNA)