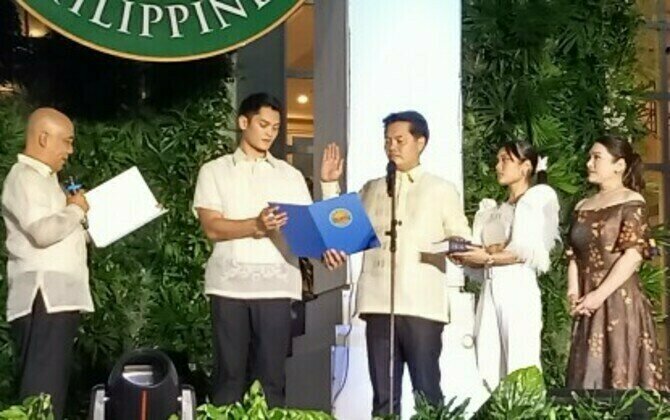 BACOLOD CITY - Newly-installed Mayor Alfredo Abelardo Benitez has committed to harnessing their full potential to achieve a "super city" status under his leadership.

"With your support, we can reach our ambition to make Bacolod a super city. A global city with a diversified economy and skilled human resources, and model for green development and good governance," Benitez, the 43rd mayor of Bacolod, said in his inaugural message in rites held at the Government Center grounds on Friday night.

A businessman by profession, Benitez, 55, was the congressman of the neighboring third district of Negros Occidental for three terms from 2010 to 2019, before he was elected city mayor in the elections last May 9.

He said that he wants to inspire Bacolodnons "to dream again, and not just dream, but dream big", adding that "in business or in politics, (he has) always aimed to be different - to chart a new path, to break new ground, to be a gamechanger".

"I want to present to the people a wider range of possibilities for Bacolod, better prospects for their families, and a brighter future for their children," he added.

Before delivering his address, Benitez took his oath before Barangay Granada village head Alfredo Talimodao Jr., in the presence of his wife Dominique "Nikki" Lopez, and their children Bettina Marie and Javier Miguel, who is the new mayor of Victorias City.

Benitez said the trust given to him by the Bacolodnons is humbling, and he will not waste such an opportunity of a lifetime and position entrusted to him.

"I am confident that we will deliver on the promise of change - especially if we work together," he added.

Benitez said he is now focusing on the "immediate tasks at hand" in his first 100 days in office.

"Our topmost priority is establishing the Bacolod Comprehensive Health Program as soon as possible. I now reiterate my pledge during the campaign to allocate the biggest portion of the city's budget to health," he declared.

He underscored the need to strengthen the capacity of law enforcement agencies to ensure peace and order, and invest in the installation of a state-of-the-art closed-circuit television system and solar-powered street lights to prevent crimes and improve the safety of pedestrians.

To clean the city's image, there is a need to "literally clean the city" by getting rid of "spaghetti wires" that are not only an eyesore but also fire and accident hazards, the mayor said.

Benitez said he has also formed a team that is conducting a review of the city's solid waste management system.

"We will invest in the rehabilitation of barangay or even private roads and open these to traffic to decongest our major roads," he added.

The mayor said the city will further support small food businesses by investing in the rehabilitation and rebranding of the three major public markets.

In the long-term, Benitez said he is eyeing building 5,000 on-site housing units in one year to avoid relocating informal settlers to distant areas and allocating at least PHP100 million for the social pension of senior citizens, solo parents, and persons with disabilities.

"Our top priority also includes education for the youth and re-skilling of the workforce. Because investing in our youth is investing for the future, we will build smart classrooms, and provide digital devices to students and teachers for a permanent shift to digital learning," he added.

Benitez said his administration is committed to the long-term water security of Bacolod. (PNA)