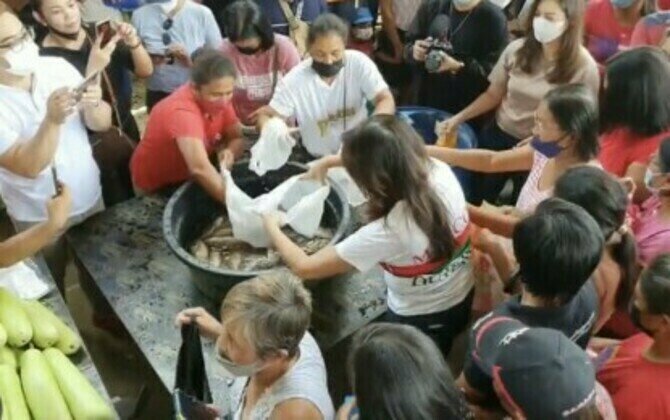 LAOAG CITY - Hundreds of Ilocano residents got complete meals and various farm products that were brought to them in their barangays by Senator Ma. Imelda Josefa "Imee" Marcos on Tuesday.

In what was meant as a "Thanksgiving Tour" to areas where the Marcos family received the most number of votes during the national and local polls, the senator visited at least three villages in the city of Batac and the towns of Badoc and Nueva Era on Tuesday to personally thank the local communities.

Accompanied by her son, Governor Matthew Joseph Manotoc along with other local officials and government workers, the group's first stop was at the Baay Covered Court in Batac City.

In her short speech after making fist bumps in between flashing victory signs and selfies with the cheerful crowd, she thanked the Ilocanos for their unwavering support of her family through the years.

Like in other parts of the country where she held similar thanksgiving events, Imee led the distribution of packed lunches to a long queue of attendees while filling in their reusable bags with assorted vegetables such as cabbage, carrots, sayote, red bell pepper, among others.

With the help of the Department of Agriculture, the items were sourced from farm producers in various provinces and regions that are known for it.

The senator said the "pasasalamat" tour is a simple gesture of the family to say thank you for the second chance given to them by the Filipino people as she claimed they have been "oppressed" and "mocked" for years.

Jhon Valentine Alonzo of Batac City said Baay residents like him were lucky and blessed for having been visited by the Marcos family.

"I pray for our leaders to be guided accordingly so that they may lead us to a better Philippines we all deserved," he said. (PNA)