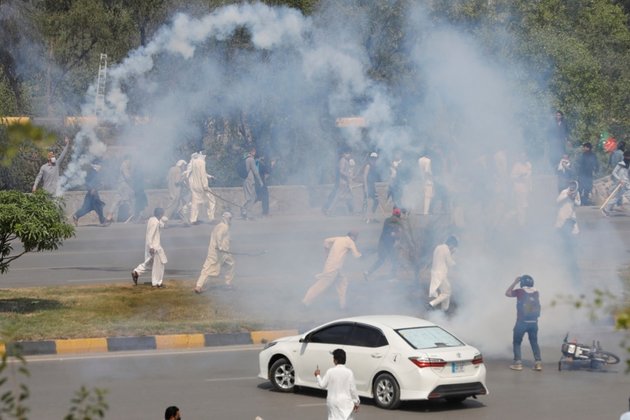 ISLAMABAD - As former Pakistan Prime Minister Imran Khan led an anti-government rally to Islamabad on Wednesday to press his demand for fresh elections, police used tear gas and batons and detained hundreds of his protesters in a bid to disrupt the march.

Khan said that tens of thousands of his supporters planned to stage a sit-in protest in the national capital and stay put until the government announced a date for snap elections.

The government late on Wednesday authorized the deployment of troops at key installations, including parliament, the Supreme Court and the diplomatic enclave housing foreign embassies. 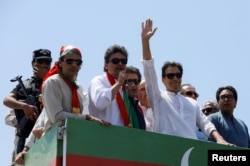 Ousted Pakistani Prime Minister Imran Khan gestures as he travels on a vehicle to lead a protest march to Islamabad, in Mardan, Pakistan, May 25, 2022.

Authorities have deployed thousands of police and paramilitary forces in key areas, including parliament, and blocked all entry routes into the city to prevent protesters from converging on Islamabad.

Entry and exit points were also blocked to and from all major cities in the most populous province, Punjab. The political turmoil has brought life in the province and Islamabad to a standstill, with schools shuttered and examinations suspended.

Despite heavy shelling with tear gas, a few thousand defiant protesters reached the famous D Square in Islamabad by late evening, the venue where Khan promised to stage the sit-in.

'No amount of state oppression and fascism by this imported government can stop or deter our march,' Khan tweeted as his convoy moved closer to Islamabad. The convoy began its journey from the northwestern city of Swabi, about 100 kilometers from the capital.

'We will remain in Islamabad till announcement of dates for dissolution of assemblies & elections are given,' Khan later wrote on Twitter.

The Sharif government has denounced the protest march as illegal and accused Khan of seeking to bring protesters to Islamabad with 'evil intentions.'

'We haven't stopped anyone from exercising their constitutional right to hold a rally or take part in democratic politics, but we can't allow anyone to sow violence and chaos,' Sanaullah maintained.

Television footage showed police clashing with Khan's supporters, beating them and in some areas breaking their vehicles' windscreens and bundling them into police vans. 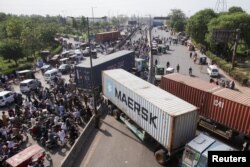 Vehicles are parked to block the roads, ahead of a planned protest march toward Islamabad led by ousted Prime Minister Imran Khan, in Lahore, Pakistan, May 24, 2022.

Eyewitnesses and officials confirmed that at least two people, including a policeman, were killed and dozens more were wounded since the police raids and anti-government protests erupted in Pakistan on Tuesday.

There was no immediate reaction from the government to his allegations.

The political crisis has deepened Pakistan's economic woes amid ongoing talks between the Sharif government and the International Monetary Fund (IMF) for the resumption of a $6 billion bailout package that Khan's ousted government had negotiated with the agency.

The weeklong talks in Qatar, which concluded Wednesday, failed to produce an immediate agreement, adding to the pressure on the beleaguered Sharif government.

In a statement, the IMF said its team had held 'highly constructive' discussions with Pakistani authorities, aimed at reaching an agreement on policies and reforms.

'The team emphasized the urgency of concrete policy actions, including in the context of removing fuel and energy subsidies and the FY2023 budget, to achieve program objectives,' the statement said. Experts said the removal of subsidies would increase inflation and could fuel public anger.

Khan has rejected the no-confidence vote against him as illegal, alleging that the United States conspired with his political opponents to plot his ouster to punish him for pursuing an independent foreign policy for his country. Since his ouster, he has held massive protest rallies condemning the Sharif administration as an 'imported government.' Khan has not offered evidence to substantiate his claims.

Washington has from the outset rejected Khan's allegations as untrue. Sharif has also dismissed the so-called foreign conspiracy claims as a 'pack of lies.'