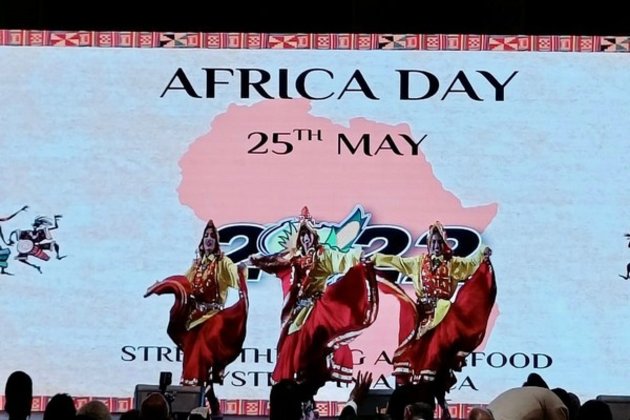 New Delhi [India], May 26 (ANI): African Heads of Missions in New Delhi and the Ministry of External Affairs (MEA) jointly celebrated Africa Day on Wednesday in New Delhi, the MEA said on Wednesday.

The event was attended by a large number of African Heads of Missions, members of the diplomatic corps in New Delhi, think tanks and senior officials of the Ministry of External Affairs and other Ministries in the Government of India.

Minister of State for External Affairs, Dr. Rajkumar Ranjan Singh delivered his keynote address as Chief Guest on this occasion and highlighted the multifaceted relations with African countries.

Africa Day is the annual commemoration of the foundation of the Organisation of African Unity in 1963 and the attainment of independence. The occasion provides an opportunity to celebrate and appreciate the continent's diverse heritage and acknowledge the economic potential of the African continent. Over the years, the Ministry of External Affairs has extended support for this annual celebration showing the importance of Africa in the Indian Foreign Policy.

" India's traditional and historic partnership with Africa has further strengthened through intensifying political engagement including 34 visits at the level of Heads of State / Heads of Government and Vice President from India and more than 100 incoming visits by African leaders to India," the MEA said in a statement.

In addition, every country in Africa has been visited by India's Union Ministers. India expanded its diplomatic footprints globally by the opening of 18 new diplomatic missions in Africa taking the total Indian Missions in the continent to 47. Prime Minister Modi's 10 Guiding Principles of India's engagement with Africa have been serving as an instrument in India's multidimensional relationship with Africa in the changing world.

Under these LoCs, 193 projects have been completed and 66 projects are currently under execution and 88 are in the pre-execution stage in various sectors such as drinking water, agriculture mechanization and irrigation, solar electrification, power plants, transmission lines, cementsugar plants, textiles, technology parks and railway infrastructure, etc.

During IAFS-III in 2015, India offered 50,000 scholarships under the Indian Technical and Economic Cooperation (ITEC) and other scholarship programmes, out of which more than 32,000 scholarships slots have already been utilized by African youth. Thousands of African students are presently pursuing their higher studies in various Indian universities under the self-financing scheme as well.

The government of India has been providing support to African countries to address the digital divide through MEA's flagship scheme e-VidyaBharati for tele-education and e-ArogyaBharati for telemedicine (e-VBAB) offering scholarships to 15,000 African students under this scheme to pursue online education in undergraduate, postgraduate and diploma courses. So far, 19 African countries have become partners in this initiative.

Furthermore, India has established seven IT Centers in Egypt, Ghana, Lesotho, Morocco, Namibia, South Africa and Tanzania to promote digital literacy among African youth. Eight Vocational Training Centers (VTCs), two Centers for Geo-informatics Applications in Rural Development (CGARD) in Madagascar and Niger, upgradation of technology center in Zimbabwe have been contributing to Africa in its digital transformation and skill enhancement.

On trade and economic front, India is the fourth largest partner for Africa registering USD 69.7 billon trade during 2018-19, and is the fifth largest investor in Africa with cumulative investments at USD 70.7 billion.

Under humanitarian assistance, India has provided food aid worth USD 15.8 million to various African countries to support their fight against hunger and poverty. (ANI)