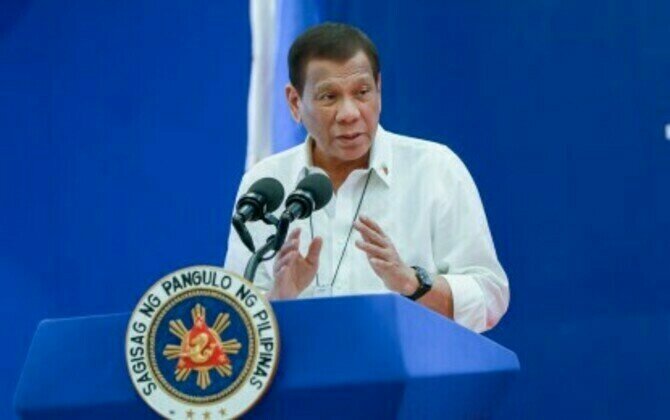 MANILA - President Rodrigo Roa Duterte on Wednesday received the credentials of four new diplomats assigned in the Philippines and expressed their intention to improve bilateral ties between their respective countries.

Duterte received the credentials of ambassadors from the Kingdom of Cambodia, Republic of Indonesia, Argentine Republic, and the Hellenic Republic in a ceremony at Malacanan Palace in Manila.

In his speech upon receiving the credentials of Cambodian Ambassador to the Philippines Phan Peuv, Duterte said the envoy will begin his tour of duty on a "promising note" as the Philippines and Cambodia commemorate 65 years of diplomatic relations.

He expressed hope that high-level exchanges between their countries continue and chart the future course of their growing engagement beyond his term.

"Cambodia can count on the Philippines' continued support and cooperation on its Asean Chairmanship this year. The Philippines remains committed to strengthening its relations with all its partners in the region," he said.

He also congratulated Cambodia on its successful chairmanship of the Asia-Europe Meeting (ASEM) last year.

Peuv, for his part, hoped to further strengthen Philippine-Cambodian relations and bring their people and nation closer.

Speaking to Indonesian Ambassador to the Philippines Agus Widjojo, Duterte described Indonesia as among the country's closest friends and regional partners.

"Our shared commitment to peace in our region and the development of our peoples have made us natural allies," Duterte said.

He told Widjojo that he has utmost esteem for Indonesian President Joko Widodo and is pleased to have witnessed the strengthening of Philippine-Indonesian cooperation despite the challenges.

"The Philippines look forward to a more bilateral engagement with Indonesia as we advance our shared interest in the promotion of security in our region and work towards post-pandemic recovery," he said.

Widjojo vowed to continue to cooperate in strengthening and expanding economic cooperation through close coordination between the two countries with bilateral and regional mechanisms in various fields.

During the presentation of credentials of Argentine Ambassador to the Philippines Ricardo Luis Bocalandro, Duterte told him that his arrival comes at an "auspicious time" when their countries will celebrate the 75th anniversary of their diplomatic relations.

"We look forward to enhancing cooperation in the regional and multilateral fronts," he said.

Duterte also expressed gratitude to the Argentine government for the good treatment of Filipinos working and residing in Argentina.

Bocalandro promised to continue improving Philippine-Argentine relations and the development that has existed between the two nations.

When Duterte received the credentials of Greek Ambassador to the Philippines Ioannis Pediotis, he cited how the Philippines and Greece are set to mark the 72nd anniversary of the establishment of their diplomatic ties this year.

"Let us further deepen bilateral engagement for the mutual benefit of our two peoples," he said.

Duterte also thanked Greece for the hospitality extended to Filipinos living in Greece and their continued support to the Filipino seafarers.

He likewise congratulated the Greek government for successfully hosting the first Defense Exhibition in Athens in July 2021 and looked forward to developing in its defense cooperation with Greece.

Pediotis expressed hope that she will be able to promote a "more advanced bilateral cooperation during her tour of duty."