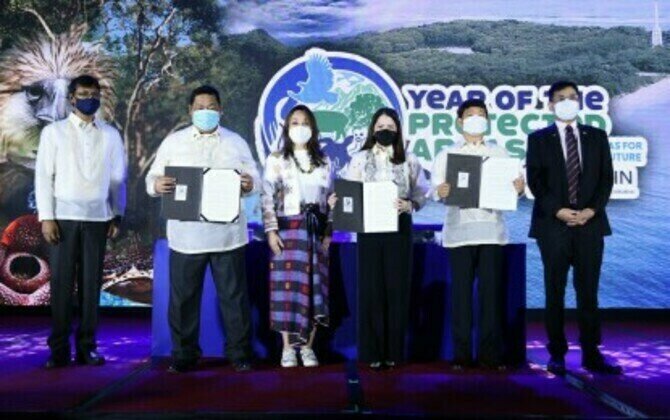 MANILA - The Department of Environment and Natural Resources (DENR), the Department of Tourism (DOT), and the Department of the Interior and Local Government (DILG) have signed a joint declaration to support the celebration of the Year of the Protected Areas or the YoPA Campaign, which promotes Philippine national parks.

The campaign launch is also part of the wider celebration for the 2022 International Day of Biological Diversity (IDBD).

The joint declaration states that the DENR, through its Biodiversity Management Bureau (BMB) and the Biodiversity Finance Initiative (BIOFIN) of the United Nations Development Programme Philippines, will lead the campaign implementation with DOT and DILG as partners.

These agencies will work to promote protected areas (PAs) under the National Integrated Protected Areas System (NIPAS) and coordinate with other agencies at the national and local levels to ensure effective conservation and sustainable management for national parks nationwide.

According to the Convention on Biological Diversity (CBD), the Philippines is one of the world's 18 mega-biodiverse countries, containing two-thirds of the Earth's biodiversity and between 70 and 80 percent of the world's plant and animal species.

The Philippines ranks fifth in the number of plant species and maintains 5 percent of the world's flora.

Over half of the country's 53,000 described species can be found nowhere else in the world.

Sadly, the Philippines is also a biodiversity critical hotspot with at least 700 species being in danger of becoming extinct. Around 93 percent of the Philippines' original forest cover has been lost since the 1990s, with 53 percent of its remaining coral reefs in poor condition.

Currently, there are 246 PAs under the NIPAS, 112 of which have been legislated, 13 have been proclaimed by the President, and 121 remain as initial components of the System.

The NIPAS Act, as amended, strengthens the protection of natural, biological and physical diversities of the environment needed for the conservation of biodiversity and the integrity of ecosystems, culture and indigenous practices by recognizing conservation areas and the management regimes being implemented by local government units (LGUs), local communities, and indigenous peoples (IPs).

It also ensures regular budget allocation for the conservation and sustainable management of each PA.

NIPAS is the classification and administration of all designated PAs to maintain essential ecological processes to preserve genetic diversity, to ensure the sustainable use of resources found therein, and to maintain their natural conditions to the greatest extent possible.

The year 2022 is an opportune time for the YoPA Campaign to commence as it coincides with the 90th anniversary of PA establishment in the country.

On February 1, 1932, RA 3915 was passed into law, which is An Act Providing for the Establishment of National Parks, Declaring Such Parks as Game Refuges, and for other Purposes.

Following the passing of this law, Mount Arayat became the first national park in the Philippines established on June 27, 1933.

Institutionalization of such efforts is important to ensure continued financing and conservation for the country's national parks.

Part of the campaign's sustainability strategy is to push for the approval of a proposed presidential proclamation to declare 2022 as the National Year of the Protected Areas and June of each year as Month of the PAs.

This proclamation will empower DENR through the Biodiversity Management Bureau as the lead agency, with DOT and DILG as partners. This will also encourage other agencies and organizations to take part in efforts to conserve and protect PAs.

The proposed presidential proclamation is currently awaiting the signature of the President.

A prequel event on May 20, 2022 was held by the DENR-BMB dubbed as Kabahagi: An IDBD 2022 Capture Quest, the DENR-BMB's first ever one-day simultaneous shoot photo contest featuring the DENR Regional, Field and Protected Area Management Offices staff as participants.

Each regional team showcased their chosen protected area in their respective regions as well as their photographic talent and ingenuity.

With the theme Protected Areas for a Protected Future, the campaign aims to launch a massive information campaign on the urgent need to conserve PAs, while also encouraging people to visit these breathtaking ecotourism destinations.

The rollout of the YoPA campaign hopes to generate additional revenues from tourist visits to ensure the continuity of conservation programs within PAs. This objective stays true to the 2022 IDBD theme of building a shared future for all life.

Aside from educating people on the importance of conserving biodiversity and managing PAs, the campaign highlights the critical need to increase the number of visits and to allow travelers to contribute to conservation efforts.

The revenues earned by the PAs will be used for programs and activities such as habitat protection and monitoring, wildlife protection and enforcement, resources assessment and monitoring, ecotourism development, conservation interventions, and communication, education and public awareness, among others. (PR)