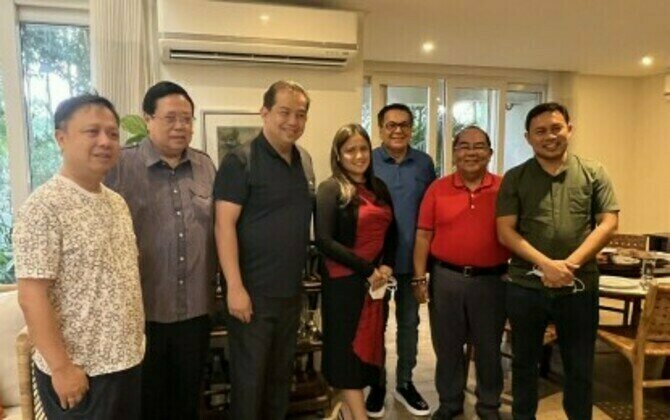 MANILA - The Nacionalista Party on Monday formally endorsed Majority Leader and Leyte Rep. Martin Romualdez to be the Speaker of the incoming 19th Congress.

Camille said Romualdez would be a vital cog as the incoming administration fulfills its vision of unity and prosperity for the country.

"His outstanding performance as Majority Floor Leader of the 18th Congress shepherding vital legislation and building consensus and harmony among the diverse members of the House make him well-suited for the Speakership," she said.

Other lawmakers have also expressed their support for Romualdez to become the next Speaker.

CamSur Rep. LRay Villafuerte, meanwhile, said the assumption of the premier House post by the reelected Leyte congressman has become a "fait accompli" with his endorsement by Arroyo, who was earlier seen as Romualdez's most formidable challenger for the elective position.

"Martin's election as Speaker right before BBM (Bongbong Marcos) delivers his inaugural SONA (State of the Nation Address) in July is now a "fait accompli" with his endorsement as Speaker by no less than GMA, who has been touted as his most serious challenger for the position," Villafuerte said.

Villafuerte said with Arroyo out of the contest for the Speakership and the solid support of most power blocs in the House for Romualdez as Speaker, it will definitely be a smooth transition from the outgoing to the incoming leadership in the bigger chamber.

"Hence, we anticipate no hitches in Martin's election as Speaker, paving the way for the Leyte legislator to hit the ground running at the start of the first regular session of the 19th Congress," he said.

Villafuerte said "Romualdez's exemplary performance as Majority Leader and consensus builder in the 18thCongress will guarantee that the House can-and will-buckle down right away to work on, and secure majority support for, new legislation that will help BBM deliver on his campaign pledge for inclusive growth for all Filipinos."

Arroyo was quoted in media reports as saying, "I will be returning to the House on June 30, 2022. I would therefore like to advise the members of the Lakas-CMD that I am throwing my support for Majority Leader Martin Romualdez to be elected as House Speaker in the next Congress. I urge all members of our party to do the same." (PNA)