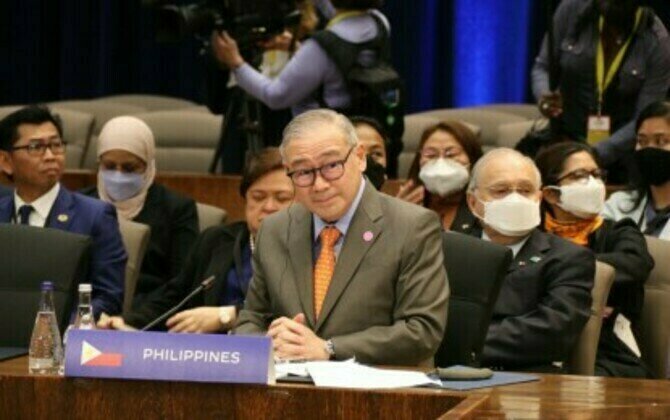 WASHINGTON - "What is ours is ours."

Thus, said Foreign Affairs Secretary Teodoro L. Locsin Jr. on the Philippines' claim of the South China Sea that was ruled overwhelmingly in its favor by the Permanent Court of Arbitration on July 12, 2016 - determining that major elements of China's claim - including its nine-dash line, recent land reclamation activities, and other activities in Philippine waters - were unlawful.

"It can be taken from us by stealth or force; yet that would not diminish a whit of our sovereign ownership. What is stolen cannot be lost by prescription, we insist. Brute facts do not ripen into law," Locsin said in his omnibus intervention during a working lunch hosted by United States (US) Vice President Kamala Harris on the 2nd day of the US-ASEAN Special Summit at the State Department here on May 13.

He said after winning the case against China in 2016, the Philippine government did not actively seek recognition from the international community so as not to undermine victory.

"That would have undermined the totality of our victory by diluting its binding legal force with the seeming need for international acclamation and support. The victory is pure law," he added.

As an archipelagic state, he said, the Philippines puts primacy on maritime freedom and security, first and foremost in its exclusive waters; be they territorial, EEZ (Exclusive Economic Zone) or continental shelf.

"The determination of the last needs work and cooperation in the UN and mutual consent in affected parts of Southeast Asia," Locsin added.

He reiterated anew that with regard to the EEZ, the Philippine government holds fast to the Arbitral Award that it fought for and won by itself.

"... in the teeth of international indifference and outside opposition from the world's second biggest economic and military power that had disdained to thresh out our differences in the Arbitral Tribunal. And yet it submitted objections; all of which failed to convince the Tribunal," Locsin said.

An EEZ, as prescribed by the 1982 UN Convention on the Law of the Sea (UNCLOS), is an area of the sea in which a sovereign state has special rights regarding the exploration and use of marine resources, including energy production from water and wind. It stretches from the baseline out to 200 nautical miles from the coast of the state in question.

He cited Ukraine which never lost its sovereignty over areas occupied by the Russian aggressor.

"It may be beaten but never defeated. The broken country's dream of taking back what was taken will never die. Opportunists argue that if it cannot be held by force or otherwise effectively enforced, it is deemed ceded," he said. "A contrary view upholds force as universal law given time and the tenacity of the taker."

He went on to say that the benefit of the Arbitral Award is, however, not exclusive to the Philippines.

"The Award provides legal clarity to all and is available to other countries with the same problematic maritime features as ours. It benefits the world across the board," he added.

US is most vocal partner

He thanked the US for being the Philippines' most vocal partner in reaffirming the 2016 Arbitral Award and upholding a rules-based international order.

"We deeply appreciate that. We most certainly welcome the US Senate's call for a common Asean approach to reaffirm the Award. Thank you, America," Locsin said.

Both, he said, agreed to continue working on sustaining our special relations in mutual defense.

Meanwhile, he added that President Rodrigo R. Duterte opted to skip the US-Asean Special Summit due to his firm commitment to the Filipino people that he would ensure a free and honest elections, demonstrating a commitment to the Philippine government's adherence to democratic principles.

Biden hosted the summit on May 12-13 that was attended 10 Asean leaders from the Philippines, Brunei, Cambodia, Indonesia, Lao, Malaysia, Myanmar, Singapore, Thailand, and Vietnam.

Held for the first time, the US-Asean summit discussions focused on strengthening ties between the US and Asean, the digital economy, sustainability, clean energy transition, economic cooperation, health care, and supply chain resilience, among others.(PNA)