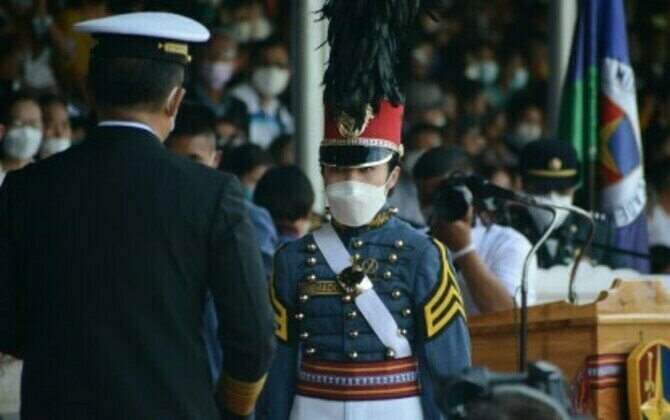 As the daughter of Col. Nicolas Quemado Jr. of PMA Maalab Class of 1993, she always had to prove herself.

"Many people think that I grew up in a sheltered, privileged life. People do not see the other side of the coin, where I carry the burden of proving myself. That I can create my own identity through my own effort and determination," she said in her valedictory address here on Sunday.

She recalled being exposed to the realities of life at a young age whenever she visited the Mindanao camps where her father was assigned.

"It was there that I saw the adversities of life. The modest life of the nearby communities and the plight of the lowly soldiers who give up the comforts of life," said the 22-year-old from Koronadal City, South Cotabato.

She used those realizations to fulfill her dreams that one day, "I, too, could bring honor to my father as the first child of a cavalier to graduate number one, not standing behind his shadow but following his life to a path of noble service".

She called on her "mistahs" (classmates) to never tire of working, even in small ways, for the betterment of the country.

Quemado also reminded the youth that they "have bigger roles to play".

"May you find the core foundation of your purpose in life. If you have a calling, hold on to it, dream high, fight for it, and be determined and strong to overcome the challenges. Your dreams and aspiration for our country are as important as ours," she said.

She is the seventh female cadet to top the PMA since it began accepting females in 1993. She will join the Philippine Navy.

Col. Quemado, who hails from Antique and is currently with the Northern Luzon command, said her daughter was a valedictorian since her grade school days.

The family knew she was capable academically but she had to prepare for the physical training.

He said her daughter, the third among four siblings, accomplished the PMA requirements while preparing for other entrance examinations for college.

"Makisama sa friends (Treat your friends well), classmates, and always follow the cadet regulation and honor system which is the foundation of an AFP officer and molds us as good citizens and model officers," Col. Quemado advised her.

Dr. Loveleih Quemado, dean of the College of Arts and Sciences of the Notre Dame of Marbel University in Koronadal, said that since her husband was always away on assignments, she was both mother and father to their four children.

She inculcated in them religious and social values, and the importance of education.

"They were taught to be responsible for their actions," the PMA valedictorian's mother said in an interview.

Those values made her confident that her daughter would hurdle the PMA.

"I did not worry because she has values. Bata pa siya, proper na siya (Even as a child, she was well behaved)," she said. (PNA)