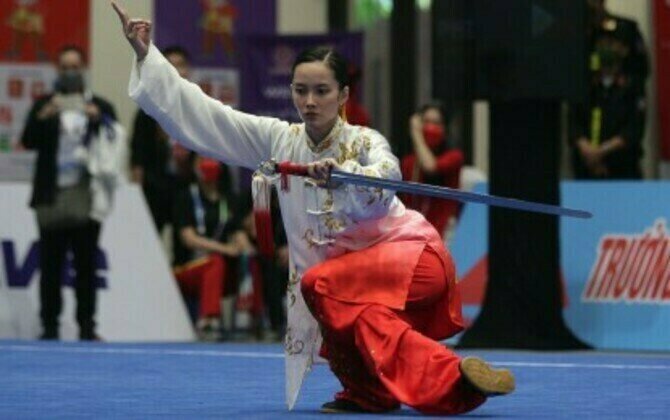 HANOI - Agatha Wong saved her best for last to rule wushu's taijijian (taolu) event and give Team Philippines its first gold medal in the sport it used to dominate in the Southeast Asian Games.

Wong bagged the gold barely 24 hours after relinquishing her crown and settling for the silver in the taijiquan (taolu), the same event she won in the past two editions of the 11-nation event.

"I'm so thankful," said Wong, who admitted coming here with very little expectations because the Filipinos only had two months to train under a bubble setup in Manila.

"We must remember na may pandemic. Kaya yung kahapon I was thankful naka-silver ako. Kahit bronze pa 'yan (There is pandemic. That's why I was thankful yesterday that I won silver. Even if it's a bronze) I'd still be thankful," said Wong, adding the she can't wait to go home.

"I miss my family," said Wong, in her black Team Philippines tracksuit, after fulfilling the post-event doping requirements.

The 23-year-old wushu artist made sure she'd keep the gold in taijijian.

Wong wowed the judges in the event that had the nine participants wielding a double-edged sword traditionally used in Chinese martial arts, and earned a score of 9.71 points.

Hometown bets Huyen Tran Thi and Trang Tran Thi tried hard to get the crowd going at the Cau Giay Gymnasium. But they couldn't do any better than 9.70 and 9.69 for the silver and bronze, respectively.

Team Philippines, which won seven gold, two silver and two bronze medals in wushu in 2019, will go home with a gold, two silvers, the other one courtesy of Jones Inso in men's taijiquan (taolu), and a bronze, also provided by Inso in taijijian.

Two more Filipinos were in action as of posting time, - Thornton Quieney Sayan in men's nangun and Johnzenth Rapada in men's gunshu.

Wong was asked if she was looking forward to next year's SEA Games in Cambodia.