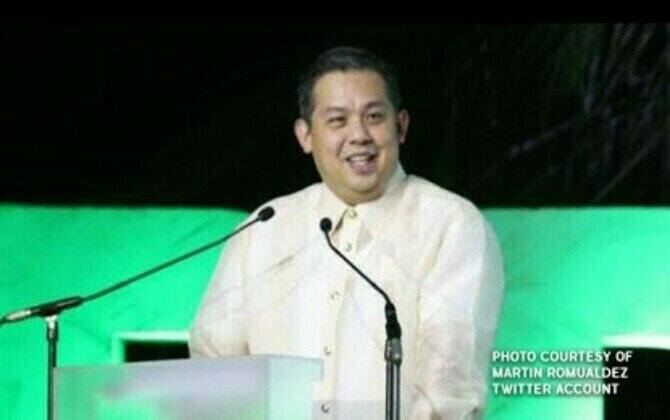 MANILA - The Partido Demokratiko Pilipino-Lakas ng Bayan (PDP)-Laban on Saturday endorsed House Majority Leader Martin Romualdez as the next Speaker of the House of Representatives in the 19th Congress.

In a press statement, PDP-Laban president and Energy Secretary Alfonso Cusi said around 65 PDP-Laban members who were able to secure seats in the House of Representatives have declared support for Romualdez.

"I am pleased to announce that the Partido Demokratiko Pilipino-Lakas ng Bayan party is endorsing House Majority Leader and Leyte First District Rep. Martin Romualdez as the Speaker of the House of Representatives in the incoming 19th Congress of the Philippines," Cusi said.

The PDP-Laban is confident that Romualdez, cousin of presumptive president Ferdinand "Bongbong" Marcos Jr., can "unite and lead" Congress for the passage of significant laws and initiatives for the benefit of the Filipino people, Cusi said.

Cusi said the party has also vouched for the leadership skills of Romualdez and lauded the House leader for being "one of the most hardworking Members of Congress."

"His track record speaks for itself," he said, citing Romualdez's support for President Rodrigo Duterte's signing of laws such as the two Bayanihan Laws and the Coronavirus Disease 2019 (Covid-19) Vaccination Program Act of 2021 to ensure the country's recovery amid the pandemic.

Cusi added that Romualdez is also one of the lawmakers who supported the enactment of the Corporate Recovery and Tax Incentives for Enterprises (CREATE) Act, as well as the amendments to the Retail Trade Liberalization Act of 2000.

"We believe that Cong. Romualdez can bring the various political parties and blocs in the House of Representatives together to continue the legacy programs of the Duterte Administration as well as shepherd in Congress the vision of President-elect Ferdinand "Bongbong" Marcos, Jr. for a more progressive Philippines," he said.

On Thursday, the National Unity Party also endorsed Romualdez as the next House Speaker in the 19th Congress, given his "exemplary service" as majority leader of the 18th Congress and his "proven ability as a consensus builder" for the different political parties in the House of Representatives.

Former president Gloria Macapagal-Arroyo, who was re-elected as representative of the Pampanga's 2nd district in the 2022 elections, urged the members of Lakas-CMD to support Romualdez's possible House speakership.

Arroyo is the chairman emeritus of the LAKAS-Christian Muslim Democrats (Lakas-CMD), while Romualdez serves as the party's president.

Romualdez earlier said he will be honored to accept any endorsement.

He was reelected and ran unopposed for a second term as representative of Leyte's 1st congressional district.

He also represented Leyte's 1st district for three straight three-year terms from 2007 to 2016, then returned to the seat for a fresh term in 2019, taking over from his wife, Yedda Marie Romualdez, who is now a representative of Tingog partylist. (PNA)