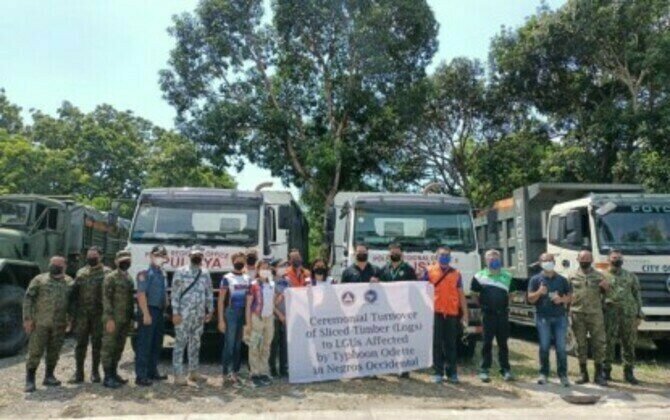 BACOLOD CITY - The Negros Occidental provincial government received on Friday some 42,400 board feet of lumber from the Office of Civil Defense-Western Visayas (OCD-6) that will be used for the shelter needs of Negrenses affected by Typhoon Odette.

The lumber came from felled mahogany and gmelina trees at the national government's dam project site in Calinog, Iloilo.

Cindy Ferrer, information officer of OCD-6, said they facilitated such kind of assistance for the first time in partnership with the Department of Environment and Natural Resources.

"This emphasizes the strong partnership of government agencies in the rehabilitation and recovery efforts for the typhoon victims," she added.

During the turn-over rites held at the Panaad Park and Stadium here, the donated lumber were received by Zeaphard Caelian, head of the Provincial Disaster Management Program Division, through OCD-6 Operations Section chief Melissa Banias and forester III Philip Lechoncito of the DENR-Bago City.

The recipients include the cities of Kabankalan, Sipalay, and San Carlos as well as the municipalities of Ilog and Hinoba-an, which will receive more than 8,000 board feet each.

Ferrer said the lumber from Iloilo will complement the shelter materials provided by the concerned local government units and other stakeholders.

"This will truly help rebuild the houses of the affected families," she added.

The cities of Kabankalan and Sipalay along with the towns of Ilog and Hinoba-an, all situated in the sixth district in southern Negros, were the worst hit in Western Visayas during the onslaught of Typhoon Odette on December 16 last year. (PNA)