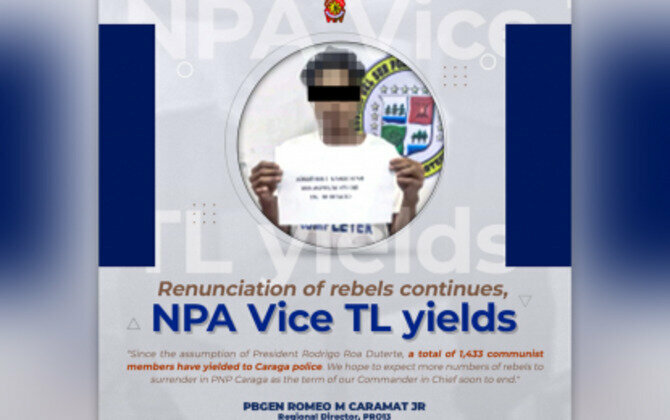 He also handed over his .38- caliber revolver upon surrender.

"The lies and broken promises of the rebels prompted him to surrender to the government," Caramat said in a statement Friday.

He added that Jasper has been in the communist movement for more than eight years and gained nothing, especially his family.

"Since the assumption of President Rodrigo Duterte, a total of 1,433 communist rebels have surrendered to the Caraga police," Caramat said, adding he remains optimistic that more NPA insurgents will continue to surrender before the President's term ends next month.

Jasper is currently undergoing debriefing, interview, and processing at the ADSPPO for him to avail of the benefits from the government's Enhanced Comprehensive Local Integration Program.

The Anti-Terrorism Council has also formally designated the National Democratic Front as a terrorist organization on June 23, 2021, citing it as "an integral and inseparable part" of the CPP-NPA that was created in April 1973. (PNA)