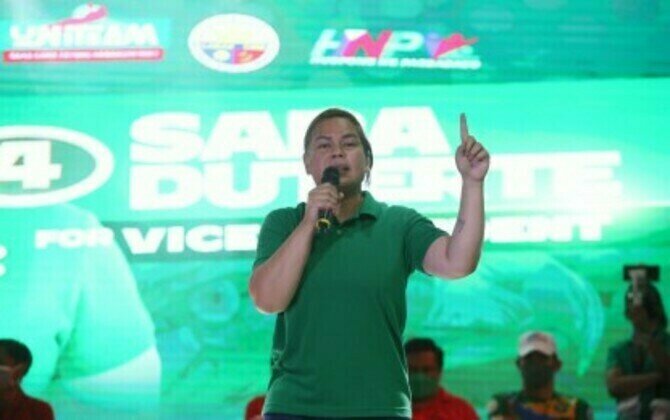 MANILA - A party-list lawmaker on Friday said presumptive Vice President Sara Duterte is a "strong woman leader" who can effectively push for changes as head of the Department of Education (DepEd).

Duterte Youth party-list Representative Ducielle Cardema issued the statement as she defended the impending appointment of Duterte at DepEd amid criticisms of her qualifications.

"If you need to reform and uplift a very big organization, especially the biggest in the country like DepEd, what you need basically is, a strong leadership character and the nation knows that Mayor Sara Duterte is a strong woman leader with a strong political will to enact changes," Cardema said in a statement.

Cardema noted that Duterte, as Davao City Mayor, had a part in heading the Local School Board.

"Kayang kaya niya ang role as Education Secretary, isang batang-bata na national leader na may puso ng isang ina para sa ating mga kabataan, may political will ipagtanggol ang ating mga guro at kapwa Pilipino at may leadership skill na baguhin ang mga nakasanayang burukrasya (She could handle the role as Education Secretary. A young national leader with the heart of a mother for the youth, the political will to defend teachers and fellow Filipinos, and the leadership skill to transform the bureaucracy)," Cardema said.

The College Editors Guild of the Philippines (CEGP) expressed apprehension that Duterte will be "an education predator with her history of violence, abuse, and impunity".

Tolentino's group is opposed to the re-implementation of the Reserve Officers Training Corps in universities, saying it "only legitimizes abuses".

"I, along with the whole DepEd community are prepared to work with Duterte-Carpio for the transition of work," Briones said in a previous statement.

She said they will turn over to Duterte the Basic Education Plan 2030.

"It will be the first time in DepEd to leave a medium-term plan for the new set of officials. We are confident that the new leaders will be fit to do the job and will continue what we have started," she said.

Senator Sherwin Gatchalian, chair of the Committee on Basic Education, Arts and Culture, said Duterte has the political capital to implement the crucial reforms in the country's education system, including a review of the K to 12 system.

Duterte's camp said she intends to produce peace-loving and patriotic graduates who can contribute to their communities.

"Our country needs a future generation of patriotic Filipinos who advocate peace and discipline in their respective communities," Duterte said in a statement. (PNA)