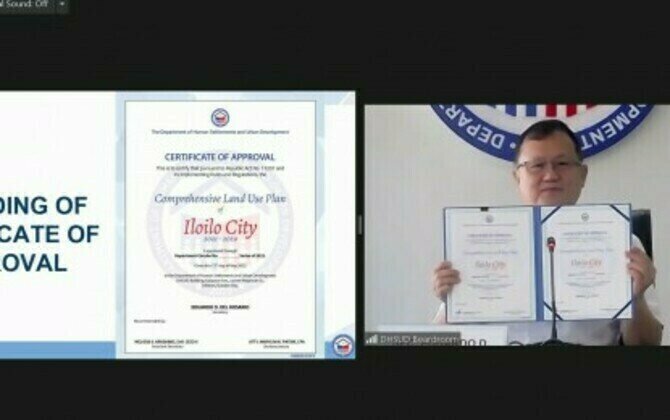 ILOILO CITY - The Department of Human Settlements and Urban Development (DHSUD) approved on Thursday afternoon Iloilo City's 2021-2029 Comprehensive Land Use Plan (CLUP) that will set the direction of the city's development in the next nine years.

"We are very proud of this document because no less than DHSUD Secretary Eduardo del Rosario who said that it will serve as (a) model for urban resilience and livability," City Planning and Development Officer Jose Roni Penalosa said in a media interview Friday.

The CLUP contains new features not present in the city's previous plans, among them the mainstreaming of climate change adaptation and disaster risk reduction; the adoption of the integrated watershed eco-systems management framework, including the Citizen Report Card; and the integration of thematic concerns, such as biodiversity, cultural heritage, urban design, and green growth.

Penalosa said what is unique with the plan, or what they call a "spatial plan", is that it deals with the distribution of land use in the city and directs the pattern of development.

"I think the most important aspect of the land use plan is the regulation of building heights, density of establishments, and where the investments for commerce and for industries will be located," he added.

The plan also includes the city's measures for dealing with the new normal, such as infrastructure support and disaster preparedness.

The city also considered its peripheral municipalities in its development programs, including road infrastructure, transport and traffic management, and tourism that have taken an "inter-LGU sort of cooperation," Penalosa said.

The CLUP has an accompanying Zoning Ordinance that will serve as the basis for the "day-to-day enforcement of the plan," he added.
(PNA)