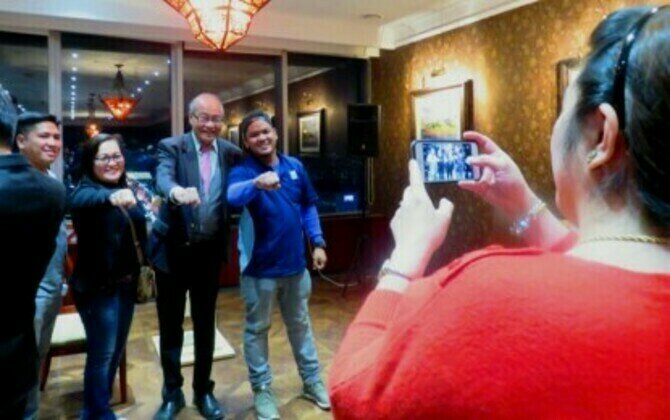 MANILA - Philippine Ambassador to China Jose Santiago Sta. Romana has passed away, the Department of Foreign Affairs (DFA) said Tuesday. He was 74.

"The Department of Foreign Affairs offers its sincere condolences to the family and loved ones of Ambassador Chito, to our nation for its great loss. We pray for the eternal repose of his soul," the DFA said in a statement.

The department has yet to provide details about the cause of the envoy's death, but the Chinese Ministry of Foreign Affairs said Sta. Romana died "due to an illness" on April 18.

The Philippine Embassy in Beijing is coordinating with Chinese authorities for the immediate repatriation of the envoy's remains.

Sta. Romana was appointed envoy to China on December 7, 2016, in recognition of his expertise and knowledge of China, which had been hailed by the DFA as a key element in the successful conduct of Manila's bilateral relations with Beijing.

In 2020, this "instrumental role" in the strengthening of Philippine and China ties has also earned him the presidential award Gawad Mabini with the Rank of Dakilang Kamanong.

Under his tenure, the DFA said Philippine-China relations have flourished despite differences and "flowered all the more in maturity and were deeply strengthened".

"We honor his important legacy of selfless service to the Filipino in the most challenging foreign post," the DFA said.

Chinese Ambassador to Manila Huang Xilian, in a separate statement, recognized Sta. Romana's contribution to the two nations' friendship and sent his condolences to his kin and the Filipino people.

"China-Philippine relations have been strengthened and indeed flourished under his distinguished tenure as the Philippine Ambassador to China. I greatly value our time working together and will always be grateful for his friendship and undeniable contribution to the development of China-Philippines relations," he said.

Huang said Sta. Romana was among the first Filipinos to "visit the new China" when he headed the visiting Philippine Youth Delegation in 1971.

"Over the past 51 years, starting from a foreign student learning Chinese in Beijing, to ABC's China correspondent for over 20 years and to Philippine Ambassador to China, Ambassador Chito has spent the best part of his life understanding and helping the world and the Philippines to understand China," Huang said.

Sta. Romana had been active prior to his passing and had facilitated numerous high-level exchanges, including the visits of President Rodrigo Duterte to China.

At the start of the pandemic, the Filipino envoy had led the repatriation of dozens of Filipinos stuck in Wuhan and other parts of China due to coronavirus restrictions.

Sta. Romana was also the non-resident ambassador of the Philippines to Mongolia and the Democratic People's Republic of Korea. (PNA)