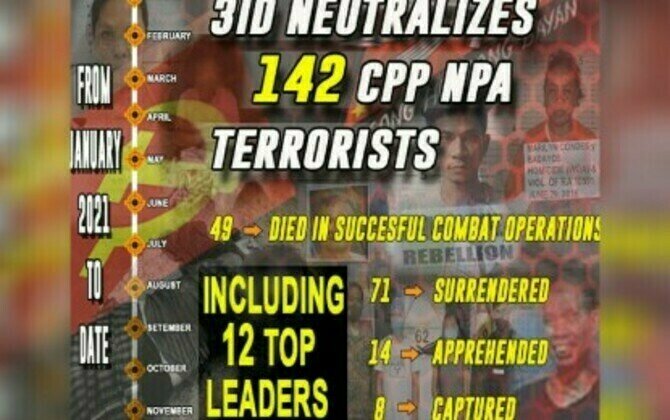 ILOILO CITY - The Communist Party of the Philippines-New People's Army-National Democratic Front (CPP-NPA-NDF) is no longer significant in Panay with two of its top leaders being among the 12 ranking officials in Western and Central Visayas neutralized by government troops in 2021.

"When neutralized it could be killed, it could be surrendered, it could be apprehended or captured. They could no longer go back to their movement," said Capt. Kim L. Apitong, officer-in-charge of the 3rd Infantry Division (3ID) Public Affairs Office, in an interview Wednesday.

Ceralvo was among those killed in the Dec. 1 operation of government forces in the NPA hideout at Sitio Burak, Barangay Alimodias, Miagao while Bocala was slain following a shootout with government troops evening of May 28 in Pavia, all in Iloilo.

The spokesperson said that the Dec. 1 operation was a big blow to the organization where apart from Ceralvo, eight other NPA rebels were killed.

"We hit them directly. We targeted them in such a way that they were surprised," Apitong added.

The 3ID, in a press statement, said through its various units, a total of 142 CPP-NPA-NDF were neutralized in Western and Central Visayas since last year up to now.

Of those neutralized, 71 have surrendered, 49 died in encounters, 14 were apprehended, and eight were captured.

"We hit them hard on the battle of perception and at the level of combat operations," Apitong said.

The spokesperson credited the support from the community which provide relevant information for their successful anti-insurgency.

He said that the terrorist group could no longer find an ally in Panay as it has lost control of barangays where they used to have sympathizers.

"We have already cleared the barangays. There are only some sitios (zones) and parts of some barangays where they threatened and harassed residents," he added.

The Anti-Terrorism Council also formally designated the NDF as a terrorist organization on June 23, 2021, citing it as "an integral and separate part" of the CPP-NPA that was created in April 1973. (PNA)