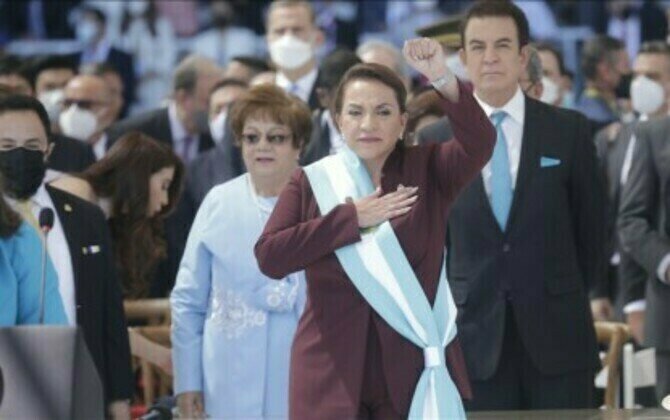 BOGOTA, Colombia - Xiomara Castro was sworn in as Honduras' first female president Thursday in a ceremony attended by US Vice President Kamala Harris, who later met with Castro to tackle immigration and other issues between the two countries.

"Our relationship with Honduras is an important one," Harris wrote on Twitter before arriving in the Central American country.

Castro, 62, the wife of former president Manuel Zelaya, who was ousted in a coup 12 years ago, took office after a landslide victory in a November election.

"Twelve years of struggle and 12 years of resistance. Today, the people's government begins," she said.

During her campaign, the former first lady spoke against the corruption and organized crime that has infiltrated government structures in the Central American country. She has also proposed a progressive agenda in a country with deep conservative roots and has vowed to legalize abortion in some cases.

However, Castro faced a major crisis even before coming to power, after several newly elected lawmakers from her left-wing Libre party elected their congressional leader, rejecting Castro's choice. The move triggered chaotic scenes in Congress and left many wondering whether she would be able to rule the country.

Meanwhile, Harris has been asked by President Joe Biden to lead US policy in the Northern Triangle -- a region of Central America comprising Guatemala, Honduras, and El Salvador - to address immigration. The vice president has stressed repeatedly that her objective is to tackle the causes of migration in the countries of origin.

Record levels of undocumented migrants, many from Honduras, are arriving at the border fleeing poverty, corruption, and gang violence in the country. (Anadolu)