UAE President confers Medal of Independence on Ambassador of Serbia 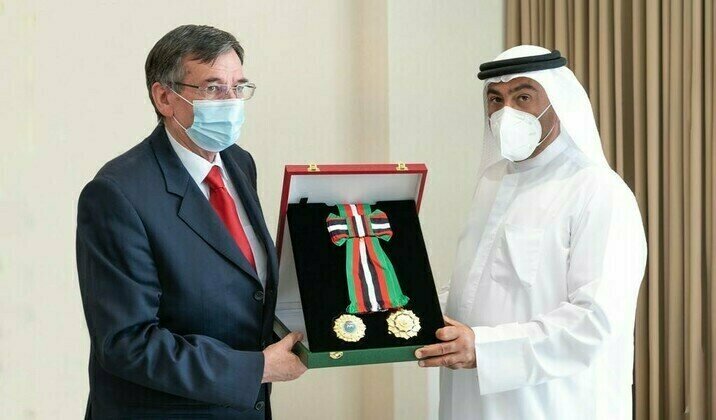 ABU DHABI, 26th January, 2022 (WAM) -- President His Highness Sheikh Khalifa bin Zayed Al Nahyan has conferred the Medal of Independence of the First Order on Stanimir Vukievi, Ambassador of Serbia to the UAE, on the occasion of the end of his tenure in the country, and in recognition of his contributions to enhancing UAE-Serbian relations.

Ahmed Ali Al Sayegh, Minister of State, presented the medal to the Serbian Ambassador during their meeting at the Ministry of Foreign Affairs and International Cooperation in Abu Dhabi.

Al Sayegh wished the Ambassador success in his future endeavours, and commended the bilateral relations between the UAE and Serbia.

For his part, Vukievi expressed his thanks and appreciation to the UAE President, praising his wise leadership approach. He also extended his thanks to His Highness Sheikh Mohammed bin Rashid Al Maktoum, Vice President, Prime Minister and Ruler of Dubai, and His Highness Sheikh Mohamed bin Zayed Al Nahyan, Crown Prince of Abu Dhabi and Deputy Supreme Commander of the UAE Armed Forces.

Vukievi commended the UAE government entities for the cooperation they showed him, hailing their role in strengthening relations between their countries.