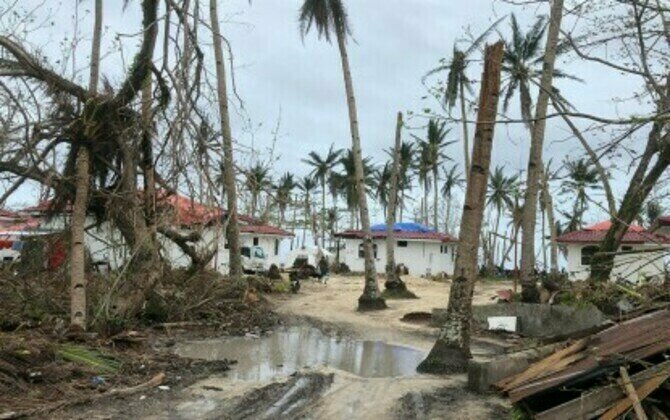 The data is based on the report made by Department of Tourism (DOT)- Region 13 Director Nelia Arina, wherein a copy of which was obtained by the Philippine News Agency on Friday.

Of the total affected tourism workers, 5,154 were from Surigao del Norte, particularly from Siargao Island and Surigao City, while seven were from the province of Dinagat Islands.

"The figures on the affected tourism workers are subject to change due to ongoing validation being conducted in the affected areas," Arina said in the report.

The agency is also validating the number of tourism-related establishments damaged or destroyed by Typhoon Odette.

She said a day after the typhoon struck, a help desk was immediately established to assist tourists who were stranded in Surigao del Norte, particularly in Siargao Island.

The agency also facilitated help and donations from Manila for the affected residents in Siargao Island.

From January 8 to 9, a total of 200 food packs and 300 blankets and mats were facilitated for distribution by the agency from donors in Manila.

Food and non-food items donated by the Makati Medical Center Foundation were also sent for immediate distribution to Siargao Island, particularly in the towns of Burgos and Del Carmen.

Meanwhile, the DOT-13 has scheduled a virtual benefit concert dubbed "Paghuyaw" (A Calm after the Storm) in partnership with the Rotary Club of Mandaluyong North.

The virtual concert, which will feature selected artists from Manila and Caraga Region, is set at 6 p.m. on January 29 and can be viewed live through the official Facebook accounts of the DOT-13 and the Rotary Club of Mandaluyong.

"The proceeds of the virtual concert will be given to the tourism workers of Siargao, Surigao, and Dinagat who were victims of the Typhoon Odette," the DOT-13 said. (PNA)

FedEx asks US to let it install laser defenses to planes

MEMPHIS, Tennessee: FedEx is seeking permission to arm its cargo planes with defensive systems to thwart attacks by heat-seeking missiles. ...

LOS ANGELES, California: Netflix has raised its monthly subscription price from $13.99 to $15.49 per month in the United States. ...

Diamonds of the Night (Dmanty noci)