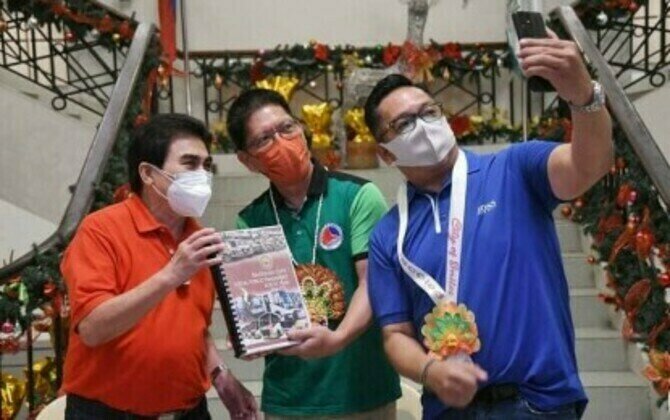 BACOLOD CITY - The city government here has identified 24 routes that will utilize 1,099 units under a new local route plan during the implementation of the Public Utility Vehicle Modernization Program (PUVMP).

Mayor Evelio Leonardia said in a statement on Friday he turned over a copy of the Local Public Transportation Route Plan (LPTRP) to Land Transportation Franchising and Regulatory Board (LTFRB) Chairman Martin Delgra III during the latter's visit to the Bacolod City Government Center on Wednesday.

"This route plan is a statement that Bacolod is indeed, progressing to greater heights. This is just one of the many plans that we envision to make our city more liveable; a city that can and will take action to address the needs of our people," Leonardia added.

City Ordinance (CO) 966, authored by Councilor Dindo Ramos, chairman of the committee on transportation and traffic, adopts the LPTRP and provides policies and guidelines for its implementation and other purposes.

Before the ordinance was approved, Leonardia issued Executive Order 10 in 2019 that pushed for the creation of the Bacolod City LPTRP team and committee spearheaded by City Planning and Development Office (CPDO) chief Mary Jean Ramos.

Leonardia said the number of units and routes included in the ordinance was carefully studied by the Department of Public Transportation (DOTr), which used the data gathered through surveys among passengers.

In a statement, Delgra said the PUVMP is "more than a milestone," not only for Bacolod, but for the entire country being the largest non-infrastructure project of the Duterte administration.

He added the LTFRB though needs the help of the local government unit (LGU) to make it happen.

"This route plan is reflective of the priority of the City of Bacolod to push for modernization of our public transport system. Soon, the people will see Bacolod not just a vibrant and prosperous city, but a modern city to be proud of insofar as public transportation system is concerned," Delgra said.

He said the LTFRB will soon issue a memorandum-circular to start the routes.

Ramos said he hopes the initial route plan will be implemented this year as the city plans to add more in the future.

LTFRB-Western Visayas Regional Director Richard Osmena said Bacolod's plan of 24 routes and 1, 099 units is "another milestone for the City of Smiles."

"I would like to thank the City of Bacolod, under the leadership of Mayor Bing, and through the help of city council, especially to Councilor Dindo Ramos, for taking up this challenge of formulating a local transport route plan fit for a highly-urbanized city," Osmena added.

The creation of the LPTRP is part of the PUVMP, advocacy of the DOTr and the LTFRB, that aims to provide safe, adequate, accessible, environment-friendly, and comfortable public transport to the general public and a long-term solution to the "worsening public transportation situation in the country". (PNA)

KATHMANDU, Nepal - While the Ministry of Finance has begun repaying interest on the loans for the planes, a batch ...