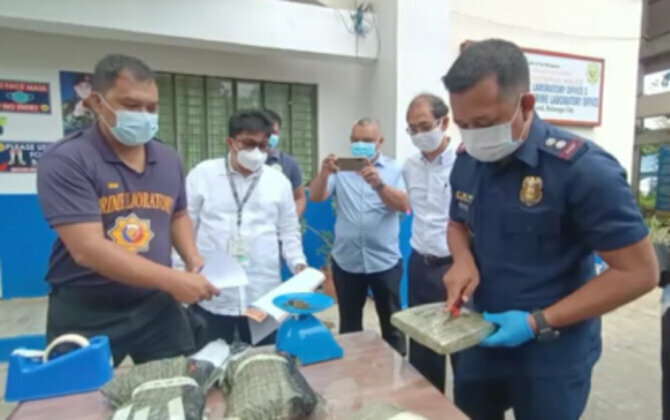 BALANGA CITY, Bataan - The Regional Trial Court (RTC) in Bataan issued on Thursday an order for destruction and disposal of more than five kilos of dried marijuana leaves seized by police during a buy-bust last November 11 in Mariveles.

Silva said seized drugs weighing one kilogram and above have to be disposed of immediately as mandated in a Supreme Court circular to avoid the danger of recycling.

Lt. Col. Vernon R. Santiago, Bataan Crime Laboratory chief, said they will turn over the marijuana to the Philippine Drug Enforcement Agency (PDEA) in Angeles City, which will burn it using an incinerator, along with other confiscated illegal drugs in the region.

Silva made an ocular inspection of the four bricks and two plastic bags, all containing marijuana fruiting tops.

Santiago opened the plastic bags, got some marijuana leaves from each bag and weighed it as representative samples of the illegal drugs.

A stenographer recorded observations made by the judge as part of court proceedings.

Col. Joel Tampis, Bataan police director, said the illegal drugs estimated to be worth PHP600,000 were confiscated in an operation that led to the arrest of two suspects from Baguio City. (PNA)