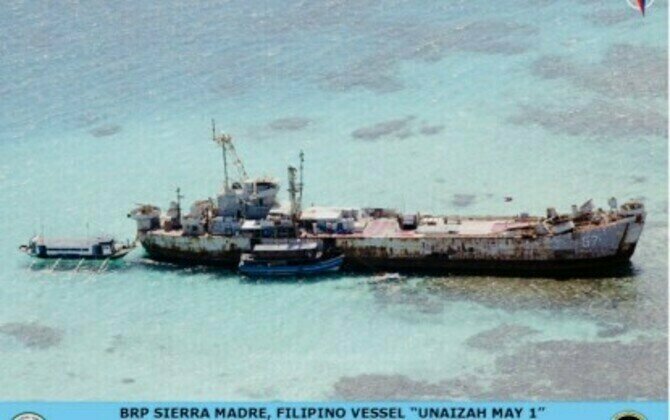 He said the government should consider refurbishing and sending reinforcements to the BRP Sierra Madre, which serves as the outpost of Philippine Navy troops in the Ayungin Shoal.

Lacson, chairperson of the Senate Defense Committee, noted the poor conditions of Filipino troops in the area and proposed the allocation of PHP254.241 million to fund the enhancement of the facilities in Kalayaan, including power system requirements, among others.

Lacson also said instead of removing the BRP Sierra Madre from the Ayungin Shoal, it should be refurbished.

The 100-meter vessel built in 1944 was deliberately run aground at Second Thomas Shoal and houses a detachment of Philippine Marines taking a close watch on Chinese vessels in the area.

"Dapat huwag natin bayaang iusog... Kung kakayanin lagay tayo ng isang barko doon na functioning (We should not allow it to be moved. And if possible, we should even reinforce it with another vessel that is functioning)," Lacson said.

The Chinese Foreign Ministry earlier demanded the Philippines to remove the BRP Sierra Madre at the Ayungin Shoal, which it claimed as a part of China's waters.

This, however, did not sit well with Defense Secretary Delfin Lorenzana as he maintained that the Ayungin Shoal lies within Manila's exclusive economic zone (EEZ) where it has sovereign rights.

On Tuesday, the Philippines resumed its resupply mission to troops at the BRP Sierra Madre, a week after the boats conducting the mission were blocked and fired with water cannons by the Chinese Coast Guard.

Lacson supported moves under Senate President Vicente "Tito" Sotto III's Senate Bill 2289 or an "An Act Declaring the Maritime Zones under the Jurisdiction of the Republic of the Philippines" and asked President Rodrigo Duterte to certify the bill as an urgent measure.

Under the bill, the Philippines could exercise sovereignty over its internal waters, archipelagic waters, and territorial sea, and the airspace over it as well as its seabed and subsoil in accordance with the United Nations Convention on the Law of the Sea and other existing laws and treaties.

The bill "provides for the needed flexibility in the passage of subsequent laws pertinent to the rights and obligations to which the Philippines is entitled and may exercise over its maritime zones."

Lacson said while the Philippines should still maintain trade relations with China, it should continue to assert its sovereignty and sovereign rights over the exclusive economic zone.