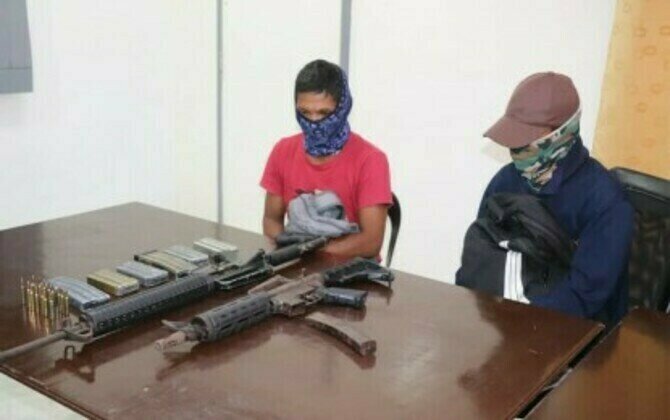 TACLOBAN CITY - Two disgruntled New People's Army (NPA) rebels in Leyte have recently surrendered with their high-powered firearms as government heightens the drive to completely wipe out the insurgency, the Philippine Army reported on Thursday.

First to voluntarily surrender to the Army's 802nd Infantry Brigade was alias Nonoy, 52, of Tapol village in Leyte town who brought with him an M16 rifle with six magazines and 15 rounds of caliber 5.56 mm ammunition.

He told soldiers when he showed up at the camp on Wednesday that he is a peasant organizer of the Mataloto Farmers Association and a member of an underground mass organization (UGMO) where he functioned as an armorer, among others.

"Nonoy" has been supportive of the ideology of the communist terrorist group since 2002 when his nephew, alias Gamay, left him an M16 rifle.

He kept the weapon since Gamay died years ago in an encounter with government forces at the vicinity of Bagabao village in Leyte town.

"With the recent surfacing and surrender of lie-low NPA members and supporters, Nonoy decided to return to the mainstream of the society by turning over the weapon. He also revealed that he was tired of continuously hiding from government forces operating in the area," the military said in a statement.

Meanwhile, alias Itchoy, a member of a local NPA group voluntarily surrendered on the same day and turned over a KG9 submachine gun.

Recruited in 2015, Itchoy, 26, a resident of Tag-abaca village in Leyte town said he did military trainings and attended meetings with the Batakang Organisasyon sa Partido (BOP) in Capinyahan and Sta. Cruz villages in Villaba, Leyte in early 2017.

He said he went on lie-low in December 2018 when the promised salary and other offers were not realized.

The two surrenderers recalled that it was very hard to live peacefully because of their past association with the NPA.

Since 2020, more than 2,000 lie-low and active NPA members and mass supporters have either surfaced or surrendered to soldiers of the 802nd Brigade in the provinces of Biliran, Leyte and Southern Leyte.

He said the revelation of the two surrenderers indicates the near extinction of the remaining armed components of the communist terrorist group in Leyte Island.

"Now is the best time for the enemies of the people like the NPA members to return to the mainstream of the society as the present government is giving them the great opportunity to live a normal life once again," Oliveros added.