'Maybe not my time yet', Go on presidential bid 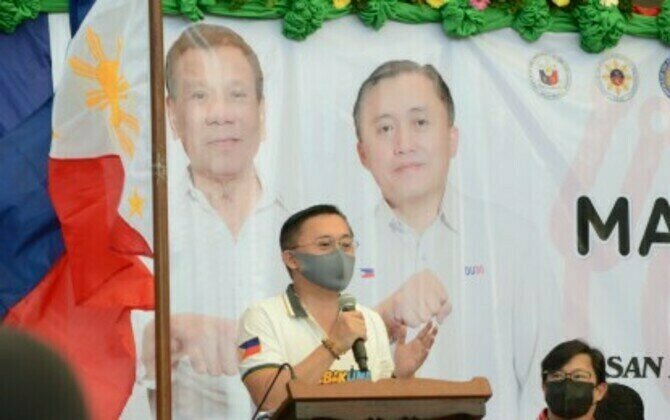 MANILA - After admitting that he is still in a state of shock more than a week after entering the presidential race, Senator Christopher "Bong" Go on Thursday said he felt that perhaps it is not yet time for him to push through with his sudden decision.

In a statement posted on social media, Go said running for the highest government post "was something I have never dreamed of."

"Iniiwasan ko ang posisyon na ito (I avoided this position), but fate -- as I said -- has a way of turning things around. Nagdesisyon ang partido at si Pangulong Duterte (The party of President Duterte made a decision) and I accepted the challenge," he said.

On November 13, Go withdrew his bid for the vice presidency under the ruling Partido Demokratiko Pilipino-Lakas ng Bayan (PDP-Laban) and subsequently filed his candidacy for president under the Pederalismo ng Dugong Dakilang Samahan (PDDS), an allied party of the ruling PDP-Laban.

Go said he continued to seek guidance from God, noting that he believed that the Presidency "is a matter of destiny."

While he was flattered about various camps seeking him to be president, he confessed that he was only human and wanted to be honest about his feelings.

He said he was ready to seek the vice presidency, but had to yield to the decision of PDP-Laban because of his soft spot for President Rodrigo Duterte and his family.

"Naging kandidato na ako as vice president for about 40 days hanggang sa nangyari po ang hindi natin inaasahan. At dahil sa mahal ko at ayaw kong masaktan si Pangulong Duterte at ang kanyang pamilya ay kinailangan ko pong magpaubaya (I was a candidate for vice president for about 40 days until something unexpected happened. And because I love and do not want to hurt President Duterte and his family, I had to give in)," he said.

In the past few days, Go said his heart and mind were "contradicting my own actions", adding his own family found his decision a tough pill to swallow.

"Tao lang po ako na nasasaktan at napapagod din. O baka dahil sadyang napakarumi at ganun kainit lang talaga ang pulitika. Talagang nagreresist po ang aking katawan, puso at isipan. Pati po ang aking pamilya ay nahihirapan (I'm just a person who gets hurt and also gets tired. Or maybe it's because politics is so dirty and so heated. My body, heart and mind are really resisting. Even my family is having a hard time)," he added.

Despite having zero political background and not coming from a political family, he said he is lucky to be a "probinsyano" who was given by the chance to serve the country and people.

However, he confessed that it might not be his time to run for president yet and he did not want to give Duterte any more problems.

"Pero sa ngayon, baka hindi ko pa po panahon. Ako yung taong handang magsakripisyo para wala nang maipit, masaktan at mamroblema. Ayoko na pong mahirapan si Pangulo at yung mga supporters natin. Mahal ko po si Pangulong Duterte. Matanda na rin po siya at ayaw ko siyang bigyan pa ng dagdag na problema (But for now, it may not be my time yet. I am the type of person who is willing to sacrifice so that no one will be caught in the middle, hurt, and have problems. I don't want the President and our supporters to suffer anymore. I love President Duterte. He is also old and I don't want to give him any more problems)," he said.

He said he would leave his fate to God and vowed to do his best every day to "serve selflessly and tirelessly."

"I am willing to make the supreme sacrifice for the good of our country, and for the sake of unity among our supporters and leaders. Marami namang paraan upang makatulong sa ating kapwa Pilipino. Ako naman, kahit saan man ako ipadpad ng aking tadhana, patuloy po akong magseserbisyo. Kung anuman ang aking magiging desisyon, ipapasa-Diyos ko na lang ang lahat alang-alang sa kung ano ang makakabuti sa bayan (There are many ways to help our fellow Filipinos. As for me, wherever my destiny throws me, I will continue to serve. Whatever my decision maybe, I will hand it over to God - I will just leave it all for the sake of what is good for the people)," he added.

Go, who earlier admitted that he did not rule out the possibility of withdrawing from the presidential race, has yet to formally declare that he has withdrawn his bid. (PNA)