4 parties link up for BBM-Sara's 'UniTeam' 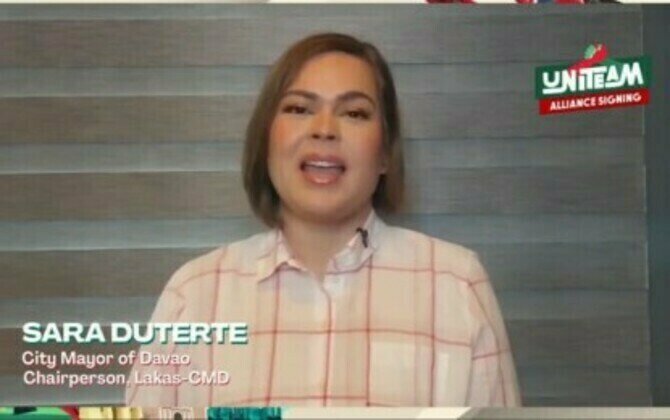 In a video message, Mayor Sara said the alliance does not only show their firm aspirations for the country but also echoes loudly of their triumph to peacefully unite and stand side by side in the pursuit of continued development and positive change for the Filipinos and the Philippines.

"As your vice presidential candidate, I am proud of this agreement that powerfully illustrates leadership transcending throughout political colors. To PFP, Lakas-CMD, PMP, and HNP - there is no turning back," she said.

She noted that the UniTeam has done something remarkable at a time when political noise and bickering drown the issues and problems confronting the Filipino people.

"That is, to forge a partnership as one organization, setting aside political rivalries and differences, to become strong partners of the people and the nation," she said.

Mayor Sara reassured that the alliance was built on friendship, trust, and the commitment to serve the Filipinos and the country.

"We shall move forward armed with the overwhelming support of the people and a political agenda that centers on the development of our great nation," she said. (PNA)