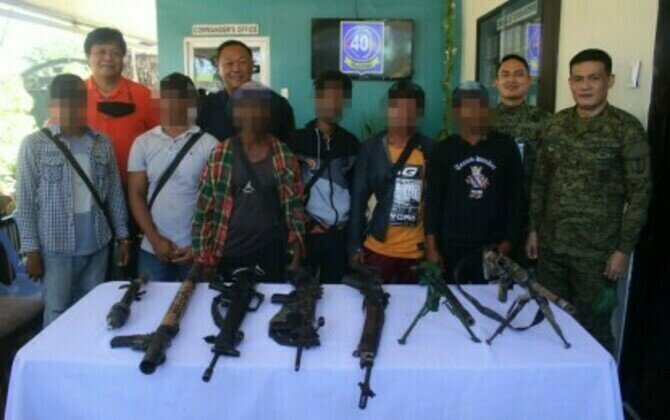 CAMP SIONGCO, Maguindanao - A field commander of the outlawed Bangsamoro Islamic Freedom Fighters (BIFF) and five of his followers have surrendered in Maguindanao due to dismay and exhaustion, the military here reported Thursday.

"They belong to the Kagui Karialan faction operating in North Cotabato and Maguindanao provinces," Lt. Col. Edwin Alburo, commander of the Army's 40th Infantry Battalion (40IB), said in a report to this camp.

Alburo said the six BIFF gunmen voluntarily surrenderedat the 40IB headquarters in Datu Paglas, Maguindanao on Wednesday afternoon through the joint effort of town officials and military field forces in the area.

He did not identify the surrenderers for security reasons.

"The sustained military operations of the Army-led Joint Task Force (JTF) Central, coupled with the unwavering support of the local government unit (LGU) in maintaining peace and order, influenced the BIFF combatants to yield to the government, which continuously weakened the extremist group," Alburo said.

He said the surrendering group was dismayed by the negligence of their leaders in attending to their needs, such as food and other provisions, amid the relentless pursuit operations against them by military forces.

The former rebels brought with them one M16 rifle, one Ultimax light machine gun, one M14 rifle, two homemade sniper rifles, and a rocket-propelled grenade launcher with ammunition.

Maj. Gen. Juvymax Uy, commander of the Army's 6th Infantry Division (6ID) and chief of JTF Central, lauded the initiatives of the soldiers involved in the peaceful surrender of gunmen.

"The surrender of BIFF field commander and his members is a clear manifestation that their organization is dwindling and on the brink of defeat," Uy said.

He also commended the officials of Datu Paglas and other LGUs in the province for helping them maintain peace in the communities.

"Through our intensified collaboration with the LGUs in the municipal and provincial level, along with the implementation of the provincial government program for the surrender of rebels, we are hopeful to encourage other BIFF members who are still in hiding to surrender and start living normal lives again with their families," Uy said.

More than 100 BIFF have yielded to the 6ID's area of operation in Central Mindanao. (PNA)