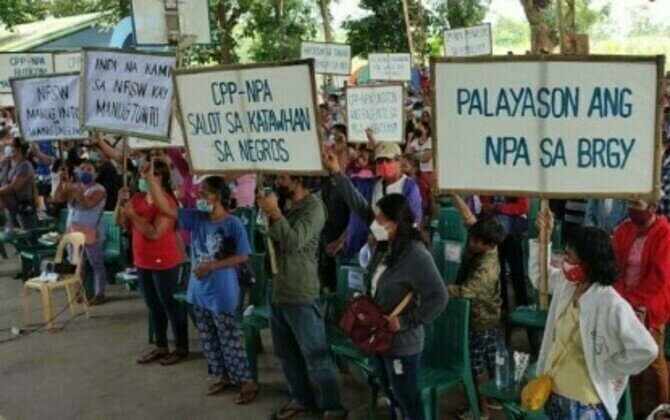 BACOLOD CITY - Broken promises have led more farmers in Silay City, Negros Occidental to cut ties with the National Federation of Sugarcane Workers (NFSW), a group identified as a legal front of the Communist Party of the Philippines-New People's Army (CPP-NPA).

The Philippine Army said 750 farmers from five associations in Barangay E. Lopez have declared their breakaway from the NFSW and denounced the abuses of the communist terrorist group over the weekend.

In a statement on Monday, Brig. Gen. Inocencio Pasaporte, commander of the 303rd Infantry Brigade, said he hopes more groups will emulate the Silaynon farmers.

"We call on all sectors to be wary of organizations linked with the communist terrorist group. Their deceptive nature and strategy will infiltrate and destroy our farmers," he said.

Pasaporte encouraged Negrenses to contact the Philippine Army, Philippine National Police (PNP), and local government units that will provide them with accurate information about the programs of the government.

Lt. Col. J-jay Javines, commanding officer of 79th Infantry Battalion, lauded the farmers for their firm stand in condemning the abusive actions of the CPP-NPA and its allied organizations.

"The pledge to withdraw their support is both an opportunity and a fresh start to free themselves from deceptions and manipulations," he said in another statement.

Jocelino Abayon, vice chair of Aidsisa Farmers and Farm Workers Association, said the NFSW promised to give them land but it never happened.

"In the end, they just left us. The Philippine Army and the PNP guided us on the things that needed to be done and led us to the right agency who can help us process the papers for us to own a land," he added.

Abayon said they have realized the government truly cares for their plight and they were deceived to join the NFSW.

The farmers took their oaths of allegiance to the Philippine government before village chief Memia Gallego, who vowed to cooperate with the authorities in her community from the influence of the CPP-NPA.

The participants raised placards expressing their sentiments against the CPP-NPA and burned replica flags of the communist terrorist group.

They also joined the symbolic signing of resolutions for the creation of the Barangay Task Force to End Local Communist Armed Conflict.

The five associations comprised the village's third batch of farmers who denounced the atrocities and abuses of the CPP-NPA this year.

The Anti-Terrorism Council also formally designated the National Democratic Front as a terrorist organization on June 23, 2021, citing it as "an integral and separate part" of the CPP-NPA that was created in April 1973. (PNA)