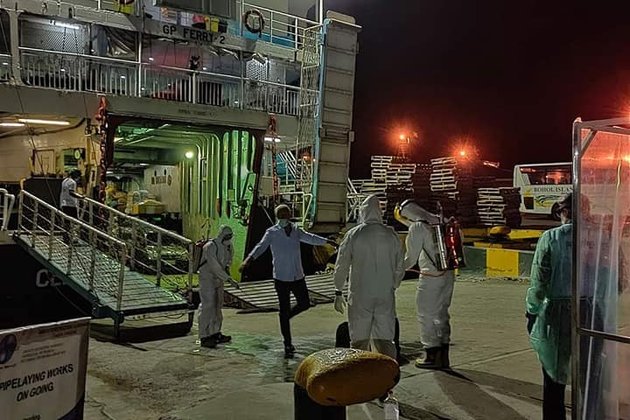 TAGBILARAN CITY, Bohol, May 23 (PIA) -- Nineteen of the 21 Boholano Overseas Filipino Workers (OFWs) sailed with nine locally stranded individuals (LSI) from Cebu to Bohol on Friday and arrived May 22, as 1Bohol COVID19 Technical Working Group spokesperson assured that everything is ready to accept the repatriated OFWs and the LSIs.

The 19 returning OFWs that arrived in Bohol by ferry in the early morning of May 22 form the fourth batch of OFWs returning to Bohol after completing the mandatory quarantine and passing COVID-19 tests with negative results in their areas of origin.

According to Capitol sources, of the 21 cleared to sail, two OFWs declined to join the homecoming batch and remained in Cebu for personal reasons.

Of the 19 OFWs, Capitol spokesperson Dr. Cesar Tomas Lopez assured Boholanos there is nothing to fear as he personally reviewed the documents proving that these repatriates have all passed the Reverse Transcription Polymerase Chain Reaction (RT-PCR) test with negative results.

RT-PCR test is the gold standard in the diagnosis of COVID-19, he stressed.

Bohol has seen at least two OFWs who tested positive in swab tests for RT PCR a few days after they arrived here.

In fact, in the executive order detailing requirements for OFWs to be allowed to enter Bohol, an RT PCR is to be used as standard.

Earlier, Bohol "was forced to accept homecoming OFWs" even without an assurance that they have been cleared of the disease as test results of the OFWs came much later.

REDUNDANT DISINFECTION. Arriving OFWs and LSIs undergo multi-levels of disinfection including hand spraying, foot baths, and misting chambers to assure locals that these returning individuals are no vectors of the dreaded viral disease. (PIA-Bohol/PDRRMO)

Of the returning 51 OFWs who have returned to Bohol in three batches, at least two tested positive after mandatory RT PCR tests here.

Of the two who tested positive, one immediately tested negative after confirmatory tests, while the other has to extend his quarantine until he can present two negative RT-PRC tests, which he did recently.

On May 21, in his presser, Gov. Arthur Yap announced that the OFW who remained positive for COVID-19 has tested negative and was released to his hometown Thursday night.

All in all, the 19 who arrived bring to 51 the total number of OFWs in the first, second and third batches of returning OFWs who are now in hotels converted into controlled and supervised facility quarantines in Panglao.

Later reports also bared that there were 12 LSIs in the vessel, the remaining three were on another transport to an undisclosed facility.

According to Lopez, of the 51 OFWs currently in quarantine, all of them exhibit no symptoms while their body temperatures range from 36.2 to 37.2 degrees centigrade.

"There are no symptoms, no complaints and all are awaiting for the (end of the) 14-day quarantine and the second PCR test results before they can be finally sent home," he said.

On the fear of residents that the returning Boholanos may be vectors of the disease, Lopez assured the public that the new system (in place) will not allow (heir return) until they present negative PCR tests.

Meanwhile, last week, a team composed of a doctor and two medical technologists who were sent to train in Cebu tested positive for COVID-19, reported Department of Health Regional Director Dr. Jaime Bernadas.

DOH-7 said the team members who arrived on Monday in Cebu were to train for Gallares Hospital and were tested for COVID-19 by Wednesday.

75% of consumers in UK, Australia and U.S. slam Chinese government

LONDON, UK - More than 75% of consumers in the UK, US and Australia blame the Chinese government for the ...

JERUSALEM - The only Palestinian industrial area in East Jerusalem is to be demolished, and the present occupiers of the ...

HOUSTON, Texas - Over 60,000 people showed up for a Houston protest and rally in the wake of George Floyd's ...

LONDON, UK - Altaf Hussain, the founder and leader of the Muttahida Qaumi Movement (MQM), has appealed to the United ...

There is no need to wonder why George Floyd (age 46) was murdered in broad daylight in Minneapolis, Minnesota, on ...

With the U.S. deciding to walk out of the Open Skies agreement, the U.S. is signaling to the world that ...

SYDNEY, Australia - Wall Street took a breather on Thursday following more than a week of protests across the U.S., ...

ROME, Italy - Global food commodity prices fell for the fourth consecutive month in May as the coronavirus (COVID-19) epidemic ...

SYDNEY, Australia - Stocks in Asia advanced on Thursday but gains were limited, and not universal.China's Shanghai Composite finished flat.The ...

PARIS, France, June 3 (Xinhua) -- France will maintain its planned tax on digital services at the Organization for Economic ...

SYDNEY, Australia - Stocks in Asia made strident gains on Wednesday, although on the Chinese mainland the advance was limited.The ...