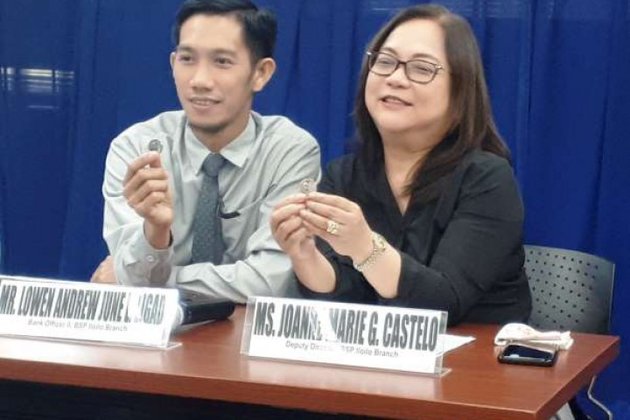 BSP-Iloilo Branch Deputy Director Joanne Marie G. Castelo said the enhancement in the 5-Piso coin was made to make the design more distinct from the other NGC Coin Series.

However, the enhanced 5-Piso coin still maintains its plain coin edge and retains its design elements such as the image of the country's hero, Andres Bonifacio, on the front side and the BSP logo and tayabak, a native flora on the reverse side.

Castelo said the new 20-Piso coin replaced the 20-Piso banknote, the most-used denomination for cash transactions across the country and is easily rendered unfit for circulation, thus, prompting the need to be returned to BSP for replacement.

She said that the issuance of the coin instead of a banknote is also more cost-efficient in terms of currency production in the long run.

"Although the production cost of a coin is greater, coins can last in circulation much longer than bills", said Castelo in a press conference held, Feb. 27, at BSP - Iloilo Seminar Room here.

Castelo said it costs P2 pesos to produce a single bill which last for 6 months while producing a single coin costs P10 but lasts for 10 - 15 years.

Thirty millimeters in diameter and weighs 11.50 grams, the new 20-Piso features the portrait of former President Manuel L. Quezon on the obverse side and the BSP logo, Malacanan Palace and the Nilad plant in the reverse.

The issuance of the coins, according to Castelo, reaffirms the BSP's commitment to not only uphold the highest standard of excellence but that it also listens to the public's sentiment. Also, BSP endeavors to bring central banking closer to the people. (JSC/LAF/PIA6-Iloilo)

Reuters suspended from Iraq after story on Covid-19 cases

Time for U.S. to stop plutocrats from directing public policy?

The novel coronavirus is quickly exposing the deadly dysfunction of our national government, which we can all now see represents ...

Paris [France], Apr 3 (Sputnik/ANI): As many as 471 people have died in French hospitals from the coronavirus over the ...

A staggering 10 million US workers have lost their jobs in the second half of March as the coronavirus forced ...

The interruption to the 2020 NASCAR season due to the COVID-19 pandemic has been understandably disappointing and disconcerting for racers, ...

The global death toll from the coronavirus pandemic topped 50,000 on Thursday.The number of deaths continued to soar in Italy, ...

NEW YORK, New York - A streak of 113 consecutive months of jobs growth came to an end with data ...

Healthcare for everyone in America needs to be free

Access to COVID-19 treatment is key to helping Americans combat the disease, as well as containing its spread. To their ...

SYDNEY, Australia - It was a downhill day on Asian bourses on Friday, with all the major indices losing ground.The ...

NFL working on two options on how to go about draft

As the NFL maintains its plan to hold the draft April 23-25, the originally scheduled dates, the league reportedly issued ...

WASHINGTON, DC - A staggering 10 million US workers have lost their jobs in the second half of March as ...

SYDNEY, Australia - Stocks in Asia were mixed on Thursday with good gains being made by markets in China, while ...