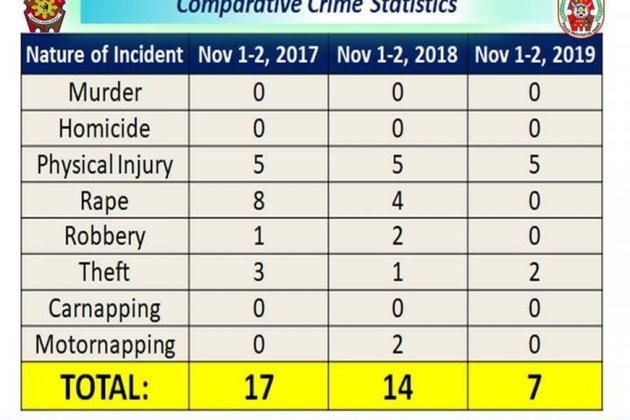 LINGAYEN, Pangasinan, Nov. 8 (PIA) - The Pangasinan Police Provincial Office (PPPO) reported a notable decrease in crime statistics during the observance of Undas 2019 as compared to the data for the past two years.

Comparative Crime Statistics revealed that for the period of November 1-2, this year, a total of seven crime incidents were recorded as compared to 17 incidents in 2017 and 14 in 2018.

"This is a notable 50 percent decrease in the occurrence of crimes with a remarkable zero incident committed inside cemeteries," said Provincial Director P/Col. Redrico Maranan.

Maranan said, in as far as public safety is concerned, the Philippine National Police shall remain steadfast in providing the community with immediate and appropriate service needed.

He also vowed to increase their efforts on enhanced managing police operations and lower the occurrences of crimes in their area of responsibility.

"Once again, Pangasinan has proven that when the law enforcement sector, local government units, stakeholders, non-government organizations and the members of the community work together and come as one, only order and peace will prevail. Crime prevention, after all, is a shared responsibility," Maranan said. (AMB/VHS/PIA Pangasinan with reports from PPPO)