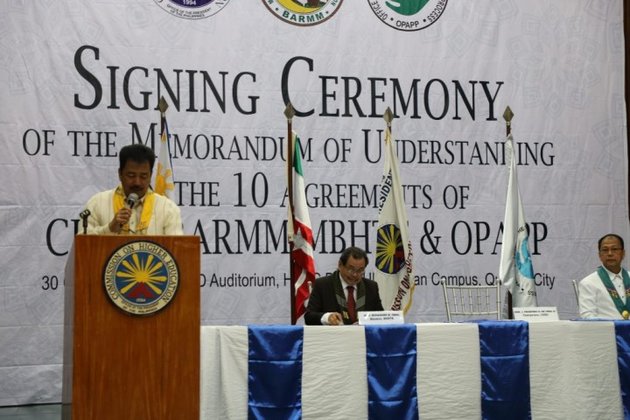 The decommissioning process, whose public launch was witnessed by no less President Rodrigo Roa Duterte last September 7 in Sultan Kudarat, Maguindanao, is under the normalization track of the Comprehensive Agreement on the Bangssamoro (CAB).

According to CHED Chairman J. Prospero de Vera III, his agency is mandated to correct the historical injustices against the Bangsamoro people by carrying out initiatives that aim to improve the quality of education in the region.

"I saw how important and vital this partnership will be in making sure that education as an anchor of development can be used to push the peace process forward," he added.

Latest data from CHED show there are 93 Higher Education Institutions (HEIs) currently operating in the BARMM.

Meanwhile, BARMM's MBHTE Minister Mohagher Iqbal stressed the importance of raising the quality of education in the region.

"It is generally acknowledged that educated people are less prone to commit violence in the society. While there are exemptions, it is therefore crucial that the educational program in the Bangsamoro is balanced and holistic," Iqbal said.

He also noted the various challenges being confronted by the region's education sector, vis-a-vis the peace and security situation in the area.

"[The] number of students in BARMM is more than 900,000. The problem in BARMM is special, it has been wrapped by fighting," Iqbal said.

De Vera outlined the initiatives being undertaken by the government through CHED to address the concerns being faced by HEIs in the BARMM.

"Ang isang nagsimulang initiative ay yung (one of the initial initiatives) BARMM is now represented in the board of the state universities that have campuses located in the BARMM area. For example, in MSU we already included the representative of the BARMM as identified by Minister Iqbal," he explained.

"This is very important because several of the campuses of MSU are in the BARMM and because a representative is already present, there is special attention given to BARMM issues in the board discussions and the prioritization of projects," de Vera said.

He pointed out that some of CHED's programs in the region had already started even before the signing of the MOU.

"The staff of the Unified Student Financial Assistance System for Tertiary Education has been sitting down with their counterparts in the BARMM to start helping private universities to be included in the Listahanan registry so that their students can gain access to the tertiary education subsidy," de Vera said.

Listahanan, also known as National Household Targeting System for Poverty Reduction, is an information management system that employs geographic targeting, household assessment, and validation based on data from marginalized sectors in the country,

For his part, Presidential Peace Adviser Carlito Galvez Jr noted how the agreement will help develop skilled, competent and forward-looking leaders in the region.

"I have no doubt that our students-beneficiaries will eventually become the next leaders of the BARMM. This is why we need to nurture them at an early stage. Many have said that education is the greatest gift that a parent and the government can give to our children and future generations," Galvez said.

"As they gain the knowledge, experience and expertise, we expect these young minds to be strong advocates of peace and moral governance that the BARMM is espousing," he added.

The normalization phase kicked into high gear after President Rodrigo Duterte signed Executive Order No. 79 on April 24, 2019 which created the Inter-Cabinet Cluster Mechanism on Normalization (ICCMN) which shall oversee the implementation of the CAB's Annex on Normalization.