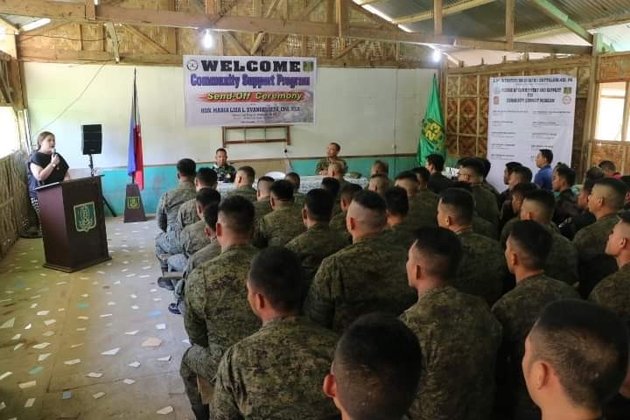 The deployment of the CSP teams is in line with the Development Support and Security Plan "Kapayapaan" of the Armed Forces of the Philippines (AFP), which aims to conduct development support operations; sustain peace efforts; ensure security; and help maintain public order to foster the foundation for economic and human development.

The activity symbolizes that the LGU, PNP, AFP and other stakeholders are one in achieving conflict-resilient, as well as disaster-resilient communities.

"It is our pleasure to fully support the program. You have been doing CSP, and the people with the local government have also been doing their best in bringing the government closer to the people. The lady mayor bared that she is thankful for this program and hopefully, this will kick-off a big difference. "I am a believer of Executive Order No. 70 and I believe that in everything we do in the government, it has to be a whole-of-nation approach. There is always this convergence of efforts; it is not always in the local government or from the people, but with all the partner agencies as well," she said.

Meanwhile, Lt. Col. Francisco L. Molina Jr., commanding officer of 23IB, highlighted that "The CSP operation is one of our means to help our local government units in addressing the peace and security concerns of the communities and to deliver basic government services especially in the far-flung and conflict-affected areas. It also aims to bring our government closer to the people by delivering quality services down to the grassroots."

This event also formed part of the implementation of the Executive Order No. 70 or the whole-of-nation approach to end local communist armed conflict in the region. (1Lt. Roel Maglalang, CMO, 23IB/ PIA-Agusan del Sur)

Reuters suspended from Iraq after story on Covid-19 cases

Time for U.S. to stop plutocrats from directing public policy?

The novel coronavirus is quickly exposing the deadly dysfunction of our national government, which we can all now see represents ...

Paris [France], Apr 3 (Sputnik/ANI): As many as 471 people have died in French hospitals from the coronavirus over the ...

A staggering 10 million US workers have lost their jobs in the second half of March as the coronavirus forced ...

The interruption to the 2020 NASCAR season due to the COVID-19 pandemic has been understandably disappointing and disconcerting for racers, ...

The global death toll from the coronavirus pandemic topped 50,000 on Thursday.The number of deaths continued to soar in Italy, ...

NEW YORK, New York - A streak of 113 consecutive months of jobs growth came to an end with data ...

Healthcare for everyone in America needs to be free

Access to COVID-19 treatment is key to helping Americans combat the disease, as well as containing its spread. To their ...

SYDNEY, Australia - It was a downhill day on Asian bourses on Friday, with all the major indices losing ground.The ...

NFL working on two options on how to go about draft

As the NFL maintains its plan to hold the draft April 23-25, the originally scheduled dates, the league reportedly issued ...

WASHINGTON, DC - A staggering 10 million US workers have lost their jobs in the second half of March as ...

SYDNEY, Australia - Stocks in Asia were mixed on Thursday with good gains being made by markets in China, while ...