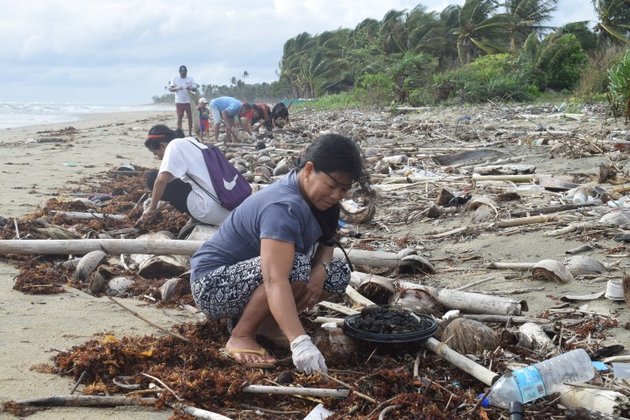 ODIONGAN, Romblon, Sept 17 (PIA) -- The Philippine Coast Guard (PCG) station in Romblon collected about 300 to 400 liters of tar balls or hardened oil that spilled across the shorelines of three coastal towns in the province.

PO3 Reyjan Jamis of PCG-Marine Environmental Protection Unit of PCG said on Sunday that a coastal clean-up drive led by their agency, together with local government units and the Department of Environment and Natural Resources (DENR), was launched over the weekend following PCG's confirmation that a bunker fuel from an unknown vessel spilled in the waters of Tablas Island, Romblon for about a week now.

Jamis also said that Barangay Agpudlos in the town of San Andres is the most affected by the spill, aside from few coastal barangays from the town of Ferrol and Odiongan.

"DENR reported to the PCG that a slimy substances clinging on the rocks were found near the shore of Barangay Agpudos requesting us to investigate," Jamis said in an interview with PIA-Romblon.

He also added that the fuel already hardened, making hard for them to trace the unknown vessel where the leak came from.

"Locals reported it only on Thursday, if the incident happened a week ago, its hard to trace where the source of the leaked is," Jamis added.

Meanwhile, the DENR is now checking the affected towns for any environmental damages. (PJF/PIA-MIMAROPA/Romblon)