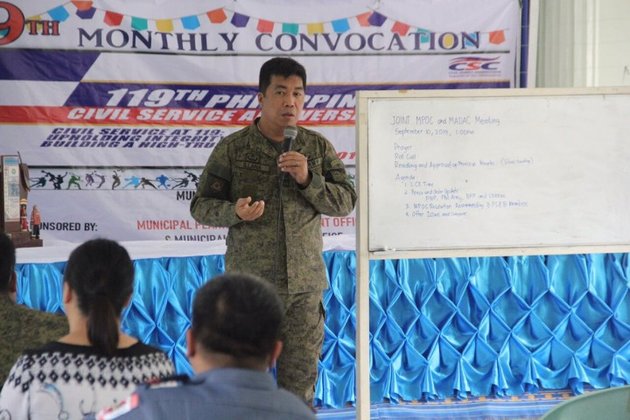 IMPASUGONG, Bukidnon, Sept. 11 -- A joint resolution declaring the CPP- NPA- NDF and its front organizations as Persona Non Grata and unwelcomed in the Municipality of Malitbog because of their atrocities committed against innocent civilians was adopted and unanimously approved by the Municipal Peace and Order Council (MPOC) and Municipal Anti- Drug Abuse Council (MADAC) during its joint meeting held at Malitbog Municipal Hall on 10 September 2019.

The meeting was intended to update local officials on the security situation of the municipality; continuously innovate plans, programs, and projects to address issues raised by the community; and deliver the needed services.

The 8th Infantry Battalion (IB), Philippine Army, attended the meeting and gave updates on the security situation in Malitbog and the army's Community Support Program (CSP) as a tool in addressing the issues exploited by the CNTs to the infiltrated barangay and sitio.

The creation of a task group (TG) to end local communist armed conflict (ELCAC) to validate and address issues that will be unearthed during CSP immersion was also proposed during the meeting. This TG will be composed of concerned local agencies of the municipality which will closely monitor and facilitate the delivery of services needed by the community.

"We need to form this Task Group because the government has many programs only that they can't reach the farthest barangays. Through you, we can bring these programs directly to the people," Lieutenant Colonel Illana, 8th IB commander, emphasized on his statement on the formation of the Municipal TG ELCAC.

He further commended the municipality in their sincere protection of their people. "I appreciate the decisions of the Local Officials declaring the CNTs and its organizations Persona non grata in their community," he said.

The Philippine Army is optimistic that through all stakeholders, local government units, and government agencies working hand-in-hand, we will address the insurgency problem in our communities. To the CPP-NPA terrorists who are still in the mountain ranges of Bukidnon come down and yield to your army, "kami ang sundalo ninyo, tutulungan namin kayong makabalik sa inyong pamilya at komunidad," Illana added. (8thIB/PIA)