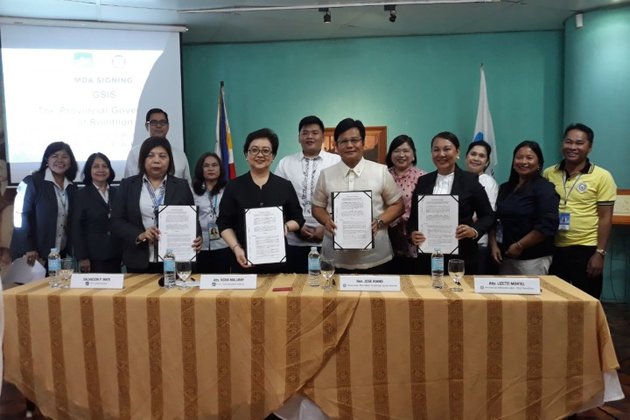 "The GSIS Financial Assistance Loan program actually is our response to the directive of President Rodrigo Duterte that we should help our teaching and non-teaching personnel of Deped to improve their financial condition," Atty. Malubay said in an interview with PIA-Romblon.

"We started offering this to DepEd until some gov't employees asked, 'Paano naman kami? (How about us?). So, we are now offering also this GFAL to non-DepEd employees," she added.

Under GFAL, borrowers may apply for up to a maximum loan amount of P500,000 payable in equal monthly instalments up to six years at an interest rate of six percent per annum.

Meanwhile, Governor Jose Riano of Romblon thanked the GSIS for extending their GFAL program to the provincial government employees because this will benefit a total of 668 members.

He added that thru the help of GFAL, Provincial Government employees will not fall prey to money lending schemes, such as '5-6', which are often tied with double digit interest rates.

According to the Government Service Insurance System, members who want to avail GFAL must be a permanent government employee with outstanding loan from private lending institutions, government banks, or cooperatives accredited or recognized by their agency; have paid premiums with the GSIS for at least three years; have no due and demandable loan account with the GSIS; not be on leave without pay; have a net take-home pay of not lower than P5,000 after deduction of monthly obligations; and have no pending administrative case or criminal charge.

A borrower with pending case is still eligible to apply for GFAL if the case was filed by a lending institution due to nonpayment as a result of the prioritization of payroll deductions.

According to the latest GSIS Data, Romblon has a total of 6,724 GSIS active members and 2,112 pensioners. (PJF/PIA-MIMAROPA/Romblon)