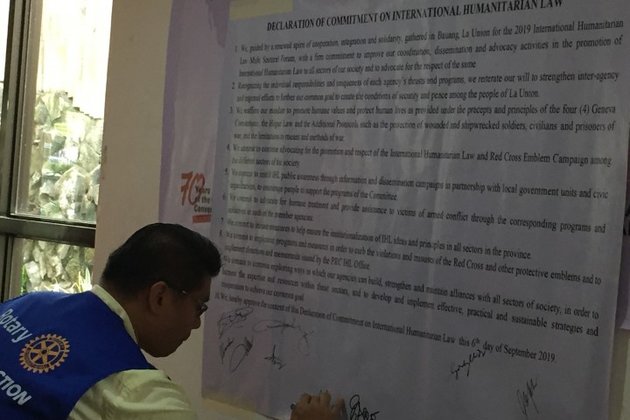 BAUANG, La Union, Sept. 9 (PIA) - Different government agencies and civic-oriented organizations gathered for a multi-sectoral forum to celebrate and unify for the recognition of the International Humanitarian Law (IHL).

The Philippine Red Cross (PRC) in La Union, in partnership with the Rotary Club of San Fernando, Inc., presented the salient features of the IHL of which the Philippines is a signatory of, among other nations, and introducing the International Committee of the Red Cross and their humanitarian work.

Highlight of the forum was the signing of the declaration of commitment on IHL signed by the members of the said Rotary Club, Inc., PRC, representatives from the different armed and civilian government agencies, local government units, judiciary, and academe.

The purpose of the Geneva Conventions of 1949 or more universally known as the "IHL," is to mitigate the suffering of those who are not part of the conflict or can no longer fight.

"The international law is enforceable but difficult, for the past 20 years, all governments honor it but they have broken the Geneva Convention of 1949 in one way or another," Mike Walker, a Rotary Club member said in his message during the program.

He added, "How you act as an individual, defines your nation...try not to go into armed conflict because we do not want war."

In the Philippines, Republic Act 9851 which defines and penalizes crimes against IHL, genocide and other crimes against humanity, was considered a breakthrough law.

This year's theme for the IHL Month is "Protecting the Defenseless in Times of Armed Conflict." (JCR/JDS/PIA La Union)