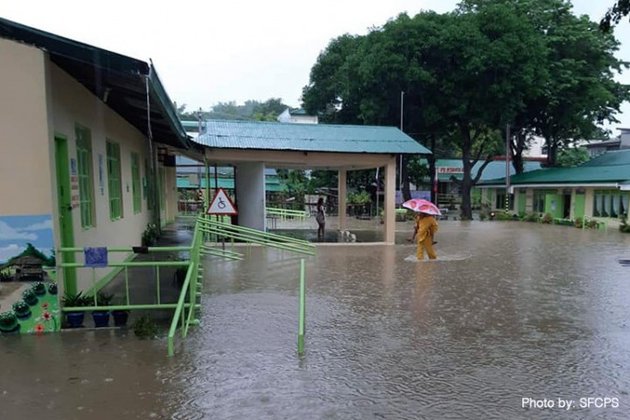 SAN FERNANDO CITY, Sept. 9 (PIA) - Classes in both private and public schools in the province of La Union, as well as work in various national government agencies was suspended on September 9 due to heavy rains and flooding in major thoroughfares caused by southwest monsoon.

Meanwhile, the local government units (LGUs) of Naguilian and Pugo declared localized suspension in their areas.

The foot to a knee deep flooding in many parts of San Fernando City also led to the suspension of work in some national government agencies today such as the Bureau of Internal Revenue (BIR)-Regional District Office 3, Social Security System (SSS), National Grid Corporation of the Philippines (NGCP), Department of Foreign Affairs (DFA)-Consular Office La Union, Commission on Audit (COA), Department of Agrarian Reform (DAR), Philippine Statistics Authority (PSA) and the Bureau of Fisheries and Aquatic Resources (BFAR).

Private banks, who are members of the La Union Bankers Association, Inc. as well as the campuses of the Don Mariano Marcos Memorial State University (DMMMSU) in the province and the Metro San Fernando Water District (MSFWD) also pronounced deferment of work today.

Moreover, the LGUs of San Fernando, Bagulin and Bauang, including the Provincial Government of La Union (PGLU), also declared suspension of work to give way to monitoring and assessment activities on the effects of the incessant heavy rains in their respective areas of responsibility.

HEAVY RAINS AND FLOODING - Heavy rains and flooding at the intersection of the national highway and Rizal Avenue in San Fernando City, La Union is monitored on September 8, 2019, Sunday during the onslaught of habagat in the province. (JCR/PIA 1)

"All disaster risk reduction and management (DRRM) teams were on red alert during the onslaught of the monsoon rains as seen on the regular reports received from the Office of Civil Defense (OCD), the main operations center of the region," Role added.

As of 6 a.m. today, the Provincial DRRM Office in La Union reported that a total of 43 families or 146 persons in Bauang town and 27 families or 96 individuals from San Fernando City are being served in different evacuation centers.

In a situation report of the Department of Public Works and Highways (DPWH) Region 1 as of 9:00 in the morning, all national roads and bridges are passable to all types of vehicles in the province of La Union. (JCR/AHFF/PIA1)