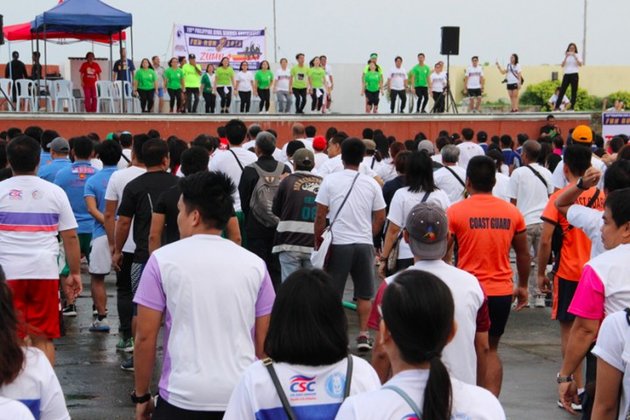 SAN FERNANDO CITY, Sept. 09 (PIA) - Despite the inclement weather, more than 1,000 participants from various government agencies gather in a kick-off activity for the celebration of the 119th Philippine Civil Service month held at the Poro Point Baywalk on September 5, here.

This year's theme: "Civil Service at 119: Upholding Integrity and Building a High-Trust Society" spearheaded by the Civil Service Commission (CSC-1) Region 1 aims to enjoin and promote healthy lifestyle and camaraderie among government employees.

The activity brought together public servants who enthusiastically participated in the 3k and 5k fun run and Zumba exercises.

"We are here to show that we are indeed responding to this calling for us to be united in upholding our integrity and sustaining the public's trust through this kind of gathering," said CSC-1 regional director Hedy Jose Lardizabal.

"This is also a reminder that despite the criticisms being hurdled to us, some may be facts or some may be allegations, and it is a challenge for us to prove that we are worthy and true to our oath of office," he added.

The winners during the fun run are: Jonfrey Opendo from Philippine Coast Guard (PCG) on the first spot, and on second and third places are Francis Domingo and Jayson Ornido of the Department of Education (DepEd), respectively for the 3K male category.

For the 3K female category, the first spot went to Rinalyn Balcorta followed by Zandro Claire Acosta, on second place and Janessa Guevarra on third place representing the Bureau of Fire Protection (BFP).

Under the 5K male category, Shindy Mark Marqueses of the Department of Social Welfare and Development (DSWD) won the first spot again while Arid Chrosel Pajinago of the Philippine Air Force (PAF) on second spot followed by Ronie Domingo of DepEd on third spot.

Finally, Nica Valenzuela of PAF bagged the first place with Beverly Basilio and Lady Edem Pascua on the second and third places, respectively.

All winners were presented with medals and cash prizes.

The award for the biggest delegation was awarded to BFP Regional Office 1 that has more than 100 participating employees.

According to CSC, the funds generated from the event will be for the Pamana ng Lingkod Bayani Fund, a fund that will be used for the posthumous award to government employees who died in the performance of their duties and finance at least three of their beneficiaries who will enroll in state universities and colleges (SUCs).

Moreover, it was announced that regional honor awards program was slated and will recognize the regional finalists of the categories: Presidential Lingkod Bayan Award, Dangal ng Bayan Award and CSC Service Award on September 12.

September of every year, government employees led by CSC, commemorate the enactment of Public Law No. 5 or an Act for the Establishment and Maintenance of an Efficient and Honest Civil Service in the Philippine Island signed on September 19, 1900. (JCR/AMB/AHFF/PIA 1)